Eric Johnson Net Worth: Eric Johnson is an American guitarist, songwriter and vocalist who has a net worth of $750 thousand dollars. Born August 17, 1954 in Austin, Texas, Eric Johnson is best known for his electric guitar skills, though he is also a highly skilled acoustic, lap steel, resonator and bass guitarist, as well as an accomplished pianist and vocalist. His musical style is as varied as instrumental prowess, incorporating elements of rock, electric and acoustic blues, jazz, fusion, soul-inspired music, folk, new-age, classical and even country music. Guitar Player magazine called Eric Johnson "…one of the most respected guitarists on the planet." Johnson was born into a musically inclined family, with three sisters who studied piano and a father who was a whistling enthusiast. Johnson began learning to play the guitar at age 11 and progressed rapidly through music that would turn out to influence his ultimate style, inclusive of such artists as Chet Atkins, Cream, Jimi Hendrix, Jerry Reed and Bob Dylan. In 1974, Johnson joined an Austin, Texas group called Electromagnets and played with them until 1977. He then formed a touring trio group called the Eric Johnson Group with drummer Bill Maddox and bassist Kyle Brock, which never really got off the ground, so Johnson turned to working as a session musician where he worked with the likes of Cat Stevens, Carole King and Christopher Cross, among others. In 1984, He was finally signed to Warner Bros. Records as a solo artist and released his album Tones in 1986. He subsequently released ten solo albums between 1978 and 2013. In March 2014, Johnson performed with Zakk Wylde, Buddy Guy, Jonny Lang, Kenny Wayne Shephard, Dweezil Zappa and Doyle Bramhall II as part of the eighth edition of the Experience Hendrix Tour, highlighting the music of Jimi Hendrix. 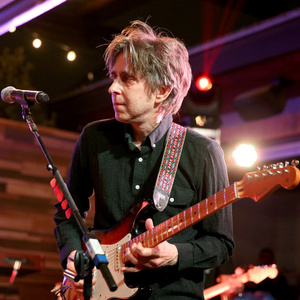