What is Emily Strayer's net worth?

Strayer was born as Emily Erwin on August 16, 1972 to parents Paul Erwin and Barbara Task in Pittsfield, Massachusetts. The family soon moved to Addison, Texas, a suburb of Dallas, where Strayer spent the majority of her childhood with her two sisters, Julia and Martha.

She began playing music at a young age, encouraged by her parents as well as her older sister Martha, who was also interested in learning instruments and writing songs. At age seven, Strayer began playing the violin and moved on to the banjo at age ten. The two sisters, along with friends from school, formed a bluegrass group called the Blue Night Express. They frequently traveled to bluegrass festivals and performed regularly and both Martha and Emily remained devoted to developing mastery over their instruments.

Emily and sister Martha continued playing music together once they both finished high school. They were joined by guitarist Robin Lynn Macy and upright bass player Laura Lynch initially, though the latter two left the band and singer Natalie Maines joined in 1995. This trio went on to experience huge commercial success.

Both the 1998 "Wide Open Spaces" and the 1999 "Fly" albums were extremely successful, achieving diamond record status and making the band the only female group in any genre of music to have achieved back-to-back certified diamond records. Both albums also received numerous awards, including a number of Grammy Awards and Academy of Country Music Awards. Some of the most popular singles from both albums include "Wide Open Spaces," "There's Your Trouble," "Cowboy Take Me Away," and "Without You." The band set themselves apart from other groups at the time given both Stayer's and her sister's virtuosic abilities on multiple instruments.

The Dixie Chicks followed up this success with the release of the 2002 album "Home," which featured a different sound given the band released the album independently while in a dispute with Sony, their record label. The album was still a success, with its single "Long Time Gone" becoming the band's first hit on the U.S. pop singles chart.

The following year, the band encountered controversy after lead singer Maines made remarks at a London concert regarding her disapproval of then president, George W. Bush, and the U.S. invasion of Iraq. The comments resulted in dramatic backlash within the country music community, though Strayer and her sister stood by their bandmate during this time even as various music publications were predicting the end of the Dixie Chicks.

However, such predictions were incorrect as the band released another album in 2006, "Taking the Long Way," which debuted at number one on U.S. pop and country music charts, going gold within its first week. The album marked the group's third No. 1 album, making the Dixie Chicks the first female band in chart history to have three albums debut at the top spot. The controversy did result in weak tour ticket sales through much of the United State but the group swept the 49th Grammy Awards, winning all five categories in which they were nominated.

The band then took a hiatus for a few years to spend time with family, though they remained together officially as a group. They resumed touring throughout the 2010s, performing in several festivals in Canada and began a world tour in 2016 throughout the United States, Canada, Europe, Australia, and New Zealand. In 2020, they released their first studio album, "Gaslighter," after a 14-year hiatus.

In June of 2020, the group opted for a name change to The Chicks, dropping the reference to the Mason-Dixon line which has connotations with slavery. 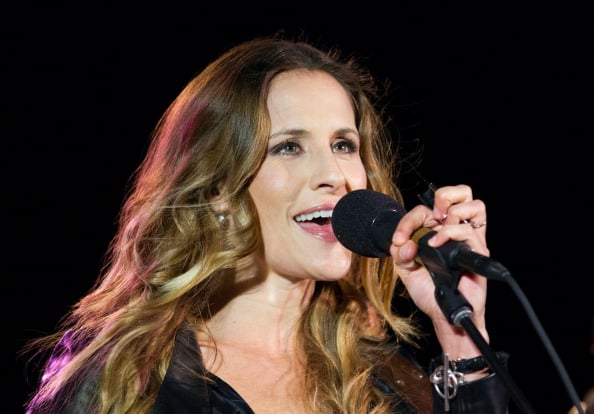 Emily continued making music even throughout the Dixie Chicks' hiatus. Along with her sister Martha, she formed a side project called the Court Yard Hounds that featured Strayer as the lead vocalist. The duo released an album in 2010, which was recorded in Martha's home studio and featured songs written primarily by Strayer. Though Maines did not join on the album, many of the same musicians and producers involved with the Dixie Chicks helped bring Strayer's side project to life. They first appeared publicly as the Court Yard Hounds in 2010 at the South by Southwest (SXSW) festival in Austin, Texas. The duo released a second album in 2013.

Emily married country music singer Charlie Robison on May 1, 1999, changing her name to Emily Robison. The relationship is said to be the inspiration for the Dixie Chicks' hit song, "Cowboy Take Me Away." The couple have three children together: Charles and twins Julianna and Henry. After remaining married for nine years, the couple divorced in August of 2008. The end of the marriage proved to be much of the inspiration for many of the songs in Court Yard Hounds, which Strayer has described as very personal.

While working on music for Court Yard Hounds, Strayer then became involved with musician Martin Strayer, who plays as a guitarist in Court Yard Hounds. The couple had a daughter together in 2012 named Violet and married in 2013.