What is Elvis Costello's Net Worth?

Elvis Costello, OBE, is an English singer-songwriter who has a net worth of $70 million dollars. Costello is best known as both a solo artist and as the frontman for the band Elvis Costello and the Attractions. His debut album "My Aim is True" was critically acclaimed when it was released in 1977. After that recording, he formed a backing band called the Attractions, and the group toured for nearly a decade before splitting in 1986. Elvis has had many enduring hit songs including "Alison" (1977), "Watching the Detectives" (1977), "Pump It Up" (1978), "Everyday I Write the Book" (1983), and "Veronica" (1989).

Elvis Costello was born Declan Patrick MacManus on August 25, 1954, in Paddington, London, England. His parents, Lilian and Ross, split up when he was 7 years old. Ross was a jazz musician, and his 1970 cover version of the Beatles' "The Long and Winding Road" (under the name Day Costello) was a hit in Australia. MacManus studied at St. Edmund's Catholic Primary School and Archbishop Myers Secondary Modern R.C. School before moving to Birkenhead with Lilian in 1971. There, he formed the folk duo Rusty with Allan Mayes. After graduating from Liverpool's St. Francis Xavier's College, he worked office jobs to make ends meet, then moved back home to London in 1974. MacManus formed the band Flip City that year, and the group stayed together until early 1976. Also in 1974, he co-starred in a R. White's Lemonade commercial with his father, and the ad won a silver award at the International Advertising Festival. Calling himself D.P. Costello, he signed a contract with Stiff Records, an independent label, in 1976. His manager, Jake Riviera, suggested the first name Elvis, and "Elvis Costello" was born.

Costello released his first single with Stiff, "Less Than Zero," in March 1977, and when the album "My Aim Is True" came out four months later, it reached #14 on the UK Albums Chart. Since his first album wasn't released outside of the U.K., Elvis once busked outside a convention of CBS Records executives in London, and though he was arrested, he ended up with a record deal with Columbia Records, CBS a few months later. By the end of 1977, Costello formed the Attractions, his permanent backing band: pianist Steve Nieve, bassist Bruce Thomas, and drummer Pete Thomas. In December 1977, Elvis Costello and the Attractions were banned from "Saturday Night Live" when they played "Radio Radio" instead of the agreed-upon "Less Than Zero." The ban ended in 1989, and the performance led to a surge in Costello's popularity in the U.S. Elvis released two more albums in the 1970s: "This Year's Model" (1978) and "Armed Forces" (1979), which peaked #4 and #2, respectively, on the UK Albums Chart. "Armed Forces" was certified Platinum in the U.K. and Gold in the United States. 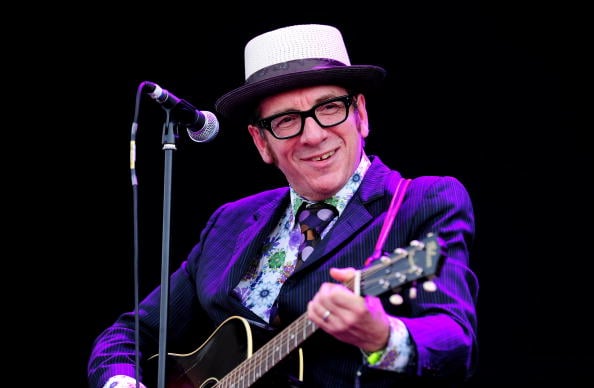 Costello kicked off the '80s with the album "Get Happy!!" and released eight more by the end of the decade, including "Punch the Clock" (1983), "Goodbye Cruel World" (1984), and "Spike" (1989). In 1985, Elvis performed a cover of the Beatles' "All You Need Is Love" at Live Aid in London, and he took part in Self Aid in Dublin the following year. After his contract with Columbia Records ended, he signed with Warner Bros., and his first album with the label, "Spike," included his most popular U.S. single, "Veronica," which was co-written by Paul McCartney. The two wrote more than a dozen songs together, including McCartney's "My Brave Face" (1989) and Costello's "So Like Candy" (1991). Elvis's most successful album of the 1990s was 1994's "Brutal Youth," which reached #2 on the UK Albums Chart.

In 1998, Costello collaborated with Burt Bacharach on the album "Painted From Memory," and the pair recorded a new version of Bacharach's 1968 song "I'll Never Fall in Love Again" for "Austin Powers: The Spy Who Shagged Me." Burt and Elvis performed the song in the film, and it appeared on the soundtrack. In 1999, Costello appeared on "Saturday Night Live's" 25th anniversary special, performing "Radio Radio" with the Beastie Boys as his backing band. Elvis has released 12 studio albums since 2001, including 2002's "When I Was Cruel" and 2013's "Wise Up Ghost," a collaboration with the Roots. From 2008 to 2010, he hosted the show "Spectacle: Elvis Costello with…" on the U.K.'s Channel 4 and Canada's CTV, and he appeared in Stephen Colbert's "A Colbert Christmas: The Greatest Gift of All" in November 2008. In 2011, Costello performed with Cookie Monster and Elmo on "Sesame Street. In 2018, he released the album "Look Now," which included songs co-written with Bacharach and Carole King, and won his first Grammy. Elvis is set to release his 30th studio album, "Hey Clockface," on October 30, 2020.

Elvis wed Mary Burgoyne in 1974, and they had a son, Matthew, before splitting up. Costello married Pogues bassist Cait O'Riordan in May 1986, and they divorced in 2002. He went on marry jazz singer/pianist Diana Krall at Elton John's home on December 6, 2003, and they welcomed twin sons Dexter and Frank exactly three years later. Elvis became a vegetarian after seeing the documentary "The Animals Film" in the early 1980s, and he is a fan of Premier League football, supporting Liverpool F.C since his youth. In 2018, he was forced to cancel the end of his European tour while he was recovering from surgery to treat a "small but very aggressive cancerous malignancy." Costello is a member of the Board of Directors of the Jazz Foundation of America. He has been working with the Jazz Foundation since 2001 and has performed at their annual A Great Night in Harlem benefit numerous times.

Costello has been nominated for 14 Grammys, winning Best Traditional Pop Vocal Album for "Look Now" in 2020. In 2004, he earned an Academy Award nomination for Best Music, Original Song for "Scarlet Tide," which was featured in the film "Cold Mountain." Elvis won a BAFTA TV Award for Best Original Television Music for "G.B.H." in 1992, and in 1989, he received an MTV Video Music Award for Best Male Video for "Veronica." In 2010, he won a Gemini Award for Best Talk Series for "Spectacle: Elvis Costello with…," which he shared with executive producers Elton John, David Furnish, Martin Katz, and Steve Hamilton Shaw. Costello has also been awarded honorary doctorate degrees in music from the University of Liverpool (2008) and the New England Conservatory (2013). 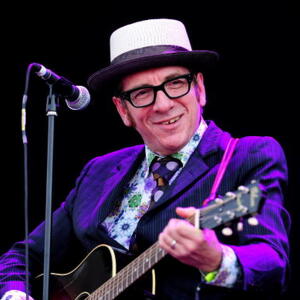