What was Ella Fitzgerald's Net Worth?

Ella Fitzgerald was an American jazz singer who had a net worth of $10 million dollars at the time of her death. Ella Fitzgerald was an influential jazz singer who rose to fame performing with the Chick Webb Orchestra in the 1930s. Following this, she had a successful solo career, and had prominent musical collaborations with Duke Ellington and Louis Armstrong, among other artists. Over the course of her career, Fitzgerald won 14 Grammy Awards, as well as the Presidential Medal of Freedom.

She debuted at the Apollo Theater in Harlem, New York on November 21, 1934 where she performed Connee Boswell's "Judy" and "The Object of My Affection." She was awarded the first prize of twenty-five dollars. She later performed at the Harlem Opera House with Tiny Bradshaw where she met Chick Webb. Fitzgerald began singing with Webb's band, and after Webb's death on one 16, 1939, the band was renamed Ella and Her Famous Orchestra. The band broke up in 1942 after having recorded over 150 songs with Fitzgerald. She later signed to Decca Records and began experimenting with scat style vocals throughout the 1940s. She eventually signed to Verve Records in the 1950s and got involved with The Cole Porter Songbook, which resulted in a series of eight songbooks. Fitzgerald was also a working actress and played the part of Maggie Jackson in Jack Webb's Pete Kelly's Blues, followed by an appearance in St. Louis Blues in 1958, Let No Man Write My Epitaph in 1960, and a 1980s television drama called The White Shadow. She also did several commercials for Memorex, Kentucky Fried Chicken, and American Express. Fitzgerald suffered from congestive heart failure in 1986 and had to have both legs amputated in 1993 as a result of diabetes. She died at the age of 79 on June 15, 1996 at her home in Beverly Hills, California.

Ella Fitzgerald was born on April 25, 1917 in Newport News, Virginia to unmarried parents Temperance and William. Early the next decade, her mother began a relationship with a new partner, Portuguese immigrant Joseph da Silva, with whom she moved to Yonkers, New York. Through da Silva, Fitzgerald had a half-sister named Frances. Growing up, Fitzgerald performed exceptionally in the many primary schools she attended. With her Methodist family, she was also active in the Bethany African Methodist Episcopal Church. Fitzgerald later went to Benjamin Franklin High School.

When Fitzgerald was 15, her mother passed away from injuries incurred from an automobile accident. Subsequently, she was raised by her stepfather, and then with her aunt in Harlem. During this time, Fitzgerald began skipping school, and she got into increasing trouble. She worked as a lookout at a Mafia-affiliated bordello, and was placed in the Colored Orphan Asylum in the Bronx when the authorities discovered what she was doing. Fitzgerald was then moved to the New York Training School for Girls, a state reformatory institution in Hudson.

After a couple years singing on the streets of Harlem to make ends meet, Fitzgerald made a crucial appearance at Amateur Night at the Apollo Theater in 1934. For her renditions of the songs "Judy" and "The Object of My Affection," she won the first-place prize. The next year, Fitzgerald performed for a week at the Harlem Opera House with the Tiny Bradshaw band. A substantial success with both audiences and her fellow musical acts, she was invited to join the orchestra of bandleader Chick Webb. She subsequently achieved fame performing at Harlem's Savoy Ballroom, and recorded numerous hit songs including "Love and Kisses" and "(If You Can't Sing It) You'll Have to Swing It." In 1938, Fitzgerald earned her most widespread recognition yet when she released a version of the nursery rhyme "A-Tisket, A-Tasket," which became one of the best-selling records of the decade.

Following the passing of Webb in 1939, his band was renamed Ella and Her Famous Orchestra, led by Fitzgerald herself. With the group, she recorded close to 150 songs. Additionally, Fitzgerald recorded and performed with the Benny Goodman Orchestra, and had a side project called Ella Fitzgerald and Her Savoy Eight. 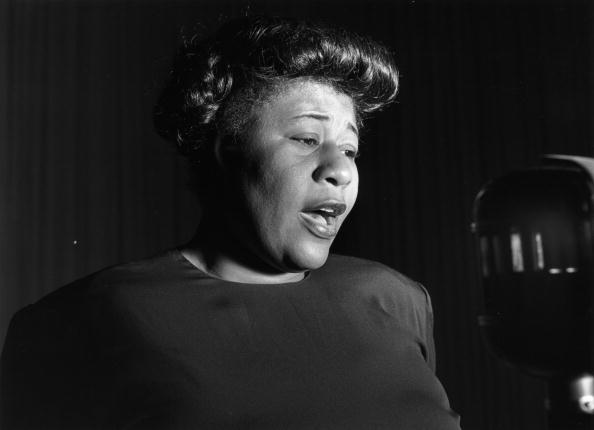 Music Career in the 40s

In 1942, Fitzgerald became the lead singer of the Three Keys. Signed with Decca Records, she also had significant hits with Louis Jordan, the Delta Rhythm Boys, Bill Kenny & the Ink Spots, Dizzy Gillespie, and Jazz at the Philharmonic. Notably, Fitzgerald started to incorporate scat singing in her performances during the decade; her 1945 scat recording of "Flying Home" was particularly influential. Also influential was her 1947 bebop recording of "Oh, Lady Be Good!"

In the mid-50s, Fitzgerald left Decca Records and signed with the newly created Verve Records. She had a pivotal moment in her career when she opened her initial engagement at Hollywood's Mocambo nightclub. In 1956, Fitzgerald released the album "Ella Fitzgerald Sings the Cole Porter Song Book," the first of eight "Song Book" sets she recorded for Verve through 1964. The "Song Book" series went on to become Fitzgerald's most commercially and critically successful work.

On top of her "Song Book" albums, Fitzgerald released such acclaimed albums for Verve Records as "At the Opera House," "Ella in Rome," "Twelve Nights in Hollywood," and "Ella in Berlin." Later, for Capitol Records, her notable albums included "Brighten the Corner," "Ella Fitzgerald's Christmas," "Misty Blue," and "30 by Ella."

In 1972, Fitzgerald had a surprise hit with the album "Jazz at Santa Monica Civic '72"; its success inspired the creation of Pablo Records, for which she went on to record around 20 albums. Among her other notable works in the 70s were "Ella in London," "A Perfect Match," "Lady Time," and "Fine and Mellow." In the 80s, her albums included "The Best is Yet to Come," "Easy Living," and "All That Jazz." The next decade, she released only live albums, such as "Ella Returns to Berlin" and "Ella Fitzgerald in Budapest." Her final album, "Ella at Zardi's," came out in 2018.

Fitzgerald appeared often on both film and television throughout her career. Her most notable screen role was in the 1955 jazz crime film "Pete Kelly's Blues," in which she played singer Maggie Jackson. Following this, Fitzgerald had cameos in "St. Louis Blues" and "Let No Man Write My Epitaph." Meanwhile, on television, Fitzgerald made guest appearances on numerous shows, singing on "The Frank Sinatra Show," "The Andy Williams Show," "The Ed Sullivan Show," and "The Carol Burnett Show," among others. She also appeared in commercials, most memorably for the computer tape producer Memorex and the fast food chain Kentucky Fried Chicken.

In 1941, Fitzgerald married local dockworker and convicted drug dealer Benny Kornegay; the marriage was ultimately annulled the following year. Subsequently, in 1947, Fitzgerald wed bass player Ray Brown; together, they adopted the child of Fitzgerald's half-sister Frances. The pair later divorced in 1953. Four years later, it was reported that Fitzgerald had secretly betrothed a young Norwegian man named Thor Einar Larsen. The relationship didn't last, however, as Larsen was sentenced to five months of hard labor in Sweden for stealing money from a former fiancé.

During the later years of her life, Fitzgerald suffered from diabetes, which resulted in a number of other health complications. She was hospitalized briefly in 1985 for respiratory problems, and again the next year for congestive heart failure. In 1993, Fitzgerald had to have both of her legs amputated below the knee due to consequences from her diabetes. At the age of 79 in June of 1996, she passed away in her home from a stroke.

Fitzgerald continues to exert a strong influence over American music and culture. Additionally, her work as a civil rights activist and philanthropist continue to be carried out through her contributions. During her life, Fitzgerald received the National Association for the Advancement of Colored People Equal Justice Award; the National Medal of Arts; and the Presidential Medal of Freedom. She also established the Ella Fitzgerald Charitable Foundation, which makes charitable grants to education, basic care needs for the disadvantaged, and medical research.