Edwin McCain net worth: Edwin McCain is an American singer-songwriter and musician who has a net worth of $7 million. Edwin McCain was born in Greenville, South Carolina in January 1970. He was a long time touring friend of the band Hootie and the Blowfish and signed with Atlantic Records. McCain released two independent albums before making his major label debut with the album Honor Among Thieves in 1995. He released the albums Misguided Roses in 1997, Messenger in 1999, Far from Over in 2001, The Austin Sessions in 2003, Scream & Whisper in 2004, Lost in America in 2006, Nobody's Fault But Mine in 2008, The Best of Edwin McCain in 2010, and Mercy Bound in 2011. His best known singles are "I'll Be" which reached #5 on the Billboard Hot 100 chart and "I Could Not Ask for More" which reached #3 on the US Adult Contemporary chart. McCain is a ship restorer who has been featured on the Animal Planet reality television series Flipping Ships. 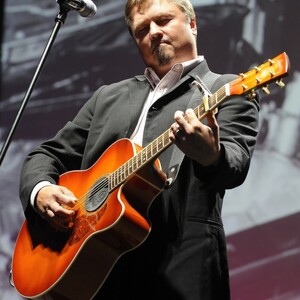