Edith Piaf net worth: Edith Piaf was a French singer who has a net worth of $20 million dollars. Born in Belleville, Paris, France on December 19, 1915, Piaf was best known for France's national diva with expertise in cabaret, torch songs, chanson, and musical theater. She was also known as La Mome Piaf, otherwise known as "The Little Sparrow.

She became active in the entertainment industry in 1935 and was affiliated with Pathe as well as Capitol Records. Some of her most popular songs included "La Vie en rose," "Non, je ne regrette rien," "La Foule," and more. She was discovered in Pigalle by Louis Leplee in 1935. Leplee encouraged her to wear a black dress on stage. Piaf had one daughter at the age of seventeen with boyfriend, Louis Dupont. Her daughter, Marcelle, died of meningitis at age two, causing Piaf to never want any more children. Her hit song, "La Vie en rose," received a Grammy Hall of Fame Award in 1998 and her last song, "L'Homme de Berlin," was recorded in 1963. Piaf died at 47 years old in Plascassier on the French Riviera due to liver cancer. She is buried next to her daughter in Pere Lachaise Cemetery in Paris. She was denied a mass by the Roman Catholic Church for her personal tendencies and what was considered to be a reckless lifestyle, however the procession attracted several thousand of her fans in support. Since her death, several of her songs have been featured in films such as Saving Private Ryan, Madagascar 3, Bull Durham, and more. Many films have also been made about Piaf's life and achievements, including Piaf, which was released in 1974 and featured Brigitte Ariel with songs performed by Betty Mars. 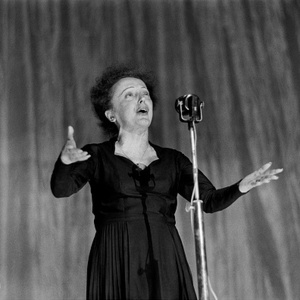