Eddie Fisher net worth: Eddie Fisher was an American singer and actor who had a net worth of $30 million. Eddie Fisher was born in Philadelphia, Pennsylvania in August 1928 and passed away in September 2010. During the first half of the 1950s he was one of the most successful pop singles artist.

Fisher hosted his own television series and sold millions of records worldwide. Eddie was married to Debbie Reynolds from 1955 to 1959, Elizabeth Taylor from 1959 to 1964, and Connie Stevens from 1967 to 1969. He was married twice more and had four children: Carrie Fisher, Todd Fisher, Joely Fisher, and Tricia Leigh Fisher. He had many successful singles and #1 hits with the songs "Wish You Were Here", "Outside of Heaven", "I'm Walking Behind You", "Oh! My Pa-Pa", and "I Need You Now". He starred in The Eddie Fisher Show from 1957 to 1959 and also starred in several other TV series including Coke Time, Texaco Star Theatre, The Colgate Comedy Hour, The George Gobel Show, The Eddie Fisher Show, and more. Fisher won a Golden Globe Award in 1958 for Coke Time and won Primetime Emmy Awards for Best Male Singer in 1955 and 1956. In 1960 he was awarded two stars on the Hollywood Walk of Fame for Television and Recording. Eddie Fisher passed away on September 22, 2010 at 82 years old. 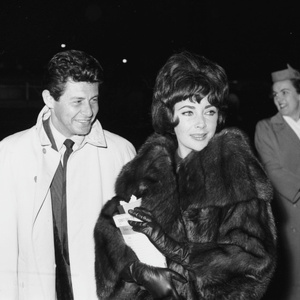