Dulce María net worth: Dulce María is a Mexican actress and singer/songwriter who has a net worth of $12 million. Dulce María was born in Mexico City, Mexico in December 1985. As a child actress she appeared in more than 100 television commercials. She joined her first organized musical group at 11. At 15 she joined a group called Jeans. She appeared in a number of telenovelas between 1994 and 2004.

Dulce María went solo in 2009 and has released two solo studio albums. She has won two Europe Music Awards and multiple Kids Choice Awards. Dulce María is the only Mexican singer to have a Platinum Album in Brazil. She has starred in several movies and television series and is best known for starring as Dul in the TV series RBD: La Familia in 2007 and as Joaquina "Jackie" Barragan in the series Mentir para vivir in 2013.As a part of RBD she had two #1 albums in Mexico and three #1 albums on the U.S. Latin charts. 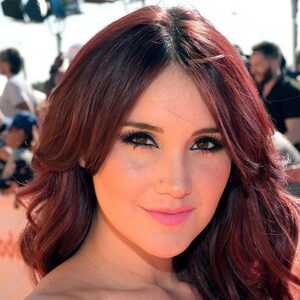