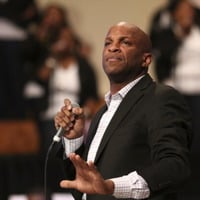 Donnie McClurkin net worth: Donnie McClurkin's net worth is $5 million dollars. Born in Copiague, New York, Donnie McClurkin began performing gospel music while he was in elementary school. After performing with numerous youth musical groups through his church, he launched the McClurkin Singers. He then formed the New York Restoration Choir. In 2001, after serving as an associate minister at a parish in Detroit, he became an ordained minister, and was sent to serve as pastor at Perfecting Faith Church in New York. In addition to his work as a minister, he has also recorded three popular albums. His first album achieved Gold status. His live album, released four years later went Platinum. He released two more studio albums in quick succession, with the first going Gold, and the second, "Psalms, Hymns, and Spiritual Songs", achieving Platinum status, and earning him a Grammy. He has also made guest appearances on such shows as "Girlfriends" and "The Parkers", and in the film, "The Fighting Temptations", among other projects.