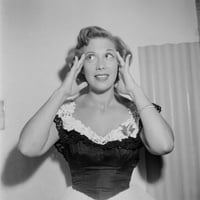 Dinah Shore Net Worth: Dinah Shore was an American singer, actress, and television personality who had a net worth of $20 million. Dinah Shoree was born in Winchester, Tennessee in February 1916 and passed away in February 1994. As a chart topping vocalist she was popular during the Big Band era in the 1940s and 1950s. She went on to become a television star hosting programs for Chevrolet. Dinah failed at singing auditions for Benny Goodman and Jimmy and Tommy Dorsey so she went solo. 80 of her songs made the charts. She hosted many music and variety shows and a pair of talk shows. She was ranked by TV Guide magazine as the #16 television star of all time. Shore had #1 hits with the songs "I'll Walk Alone", "The Gypsy", "The Anniversary Song", and "Buttons and Bows". She won a Golden Globe in 1956 and was nominated for another in 1977. Shore also won six Primetime Emmy Awards and two Daytime Emmy Awards over her career. She was awarded with three stars on the Hollywood Walk of Fame for Television, Recording, and Radio. Dinah was married twice and had a daughter and an adopted son. Dinah Shore passed away on February 24, 1994 after being diagnosed with ovarian cancer just five days short of her 78th birthday.