Diana Krall Net Worth: Diana Krall is a Canadian musician who has a net worth of $20 million. Born in Nanaimo, British Columbia, Diana Krall is famous for her jazz piano music and singing. She attended Boston's Berklee College of Music before moving back to Canada and releasing her debut album in the early '90s.

Krall's first major success came with the release of her third album, "All for You: A Dedication to the Nat King Cole Trio" in 1996. It was nominated for a Grammy Award and spent 70 weeks on the jazz charts. Her collaborative effort, "The Look of Love", went platinum and cracked the Billboard top ten. She has worked with artists including Tony Bennett, husband Elvis Costello, and Ray Charles. Between 1993 and 2012, Krall has released a dozen studio albums and three live records. She has appeared in a handful of movies and TV shows, including "Public Enemies", "Mississippi Rising", "De-Lovely" and "Melrose Place". Her recording of "I'll Make It Up As I Go" is featured in the Robert De Niro and Marlon Brando film "The Score". Krall is a five-time Grammy Award winner with honors that include Best Jazz Vocal Album and Best Jazz Vocal Performance. Krall married Elvis Costello in 2003 in London, and they have twin sons together. 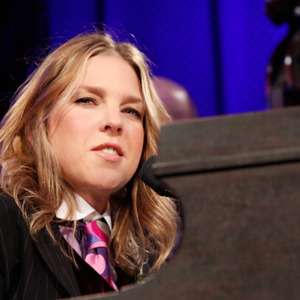