Deborah Cox net worth: Deborah Cox is a Canadian singer-songwriter and actress who has a net worth of $6 million dollars. Deborah Cox was born in Toronto, Ontario, Canada in July 1974. At 12 she started singing on TV commercials and in talent shows. As a teenager she would perform in nightclubs and started writing music.

She got her start by performing as Celine Dion's backup singer for six months. She moved to Los Angeles in 1994. In 1995 she was signed to Arista Records by Clive Davis. Her self-titled debut studio album was released in 1995. The album was certified Gold and hit #1 on the Top Heatseekers chart. Her second album One Wish also made it #1 on the Heatseekers chart and was certified Platinum. Deborah has released a total of five studio albums. Her hit single "Nobody's Support to Be Here" set a record for staying #1 on the Billboard Hot R&B/Hip-Hop Singles & Tracks chart for 14 weeks. She has had 12 #1 hits on the Billboard Hot Dance Club Play chart. Cox has won three Juno Awards and two Soul Train Awards. She is married to her manager Lascelles Stephens and the couple has three children together. In 2014, Deborah Cox provided her vocals to produce songs for an upcoming Lifetime movie even about Whitney Houston. 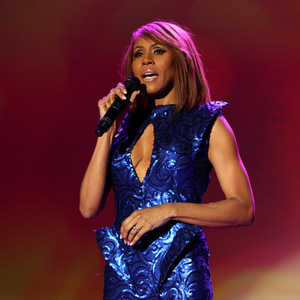