Dean Geyer Net Worth: Dean Geyer is a South African-Australian singer/songwriter and actor who has a net worth of $1 million dollars. Born March 20, 1986 in Johannesburg, South Africa, his family has a strong connection to martial arts, with members from previous and current generations gaining black belts in karate, including Dean himself. In 2003, he auditioned for Australian Idol and was the first contestant to be officially accepted by Idol into the top 100. Due to a change of rules on Idol, Geyer was allowed to accompany himself on guitar. During the culling rounds held in Sydney, Australia, where the Top 125 are cut down to the Top 24, Geyer survived and moved to the next round. On the second day of the process, he was put into a group with Chris Murphy (brother of Australian Idol (2003) 2 star, Courtney Murphy). They chose to sing the U2 smash hit, Beautiful Day and both passed through to the next round. On August 28, Geyer was the second contestant voted into the top 12. His interest in music started during his early teens when he learned to play the guitar, and his musical abilities were showcased during the Australian Idol audition when he played a self-composed piece entitled Nice To Meet You. In 2004, Geyer formed a band called Third Edge and recorded his original music at Studio 52. Studio 52 then allowed Third Edge to perform at the Kool Skools awards night where they received only a nomination. Dean is a strong Christian and has been very open about this calling in his life, particularly during his Australian Idol days. He is also a part-time model and was featured in the 2005 Bodyline Men Calendar as Mr. May. He also played a notable role as Ty Harper in the Australian soap opera Neighbours as well as playing a role on the series Glee during Season 4. 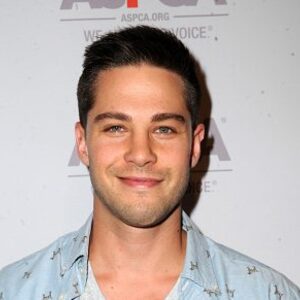