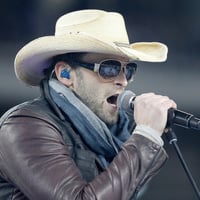 Dean Brody net worth: Dean Brody is a Canadian county music artist who has a net worth of $8 million. Dean Brody was born in Smithers, British Columbia, Canada in August 1975. He is a singer and songwriter who also plays acoustic guitar. Brody his self-titled debut studio album in 2009 and it reached #4 on the US Heatseekers chart. He released the albums Trail in Life in 2010 and Dirt in 2012. Brody released the album Crop Circles in 2013 and his 2015 album Gypsy Road reached #7 in Canada. Brody's single "Bounty" reached #1 on the Canadian Country chart and he has also had success with the singles "Brothers", "Crop Circles", "Another Man's Gold", "Upside Down", "Bring Down the House", "Love Would Be Enough", and "Monterey". Brody has won several Canadian Country Music Association and Juno Awards.