How much is Dave Bartholomew Worth?

Dave Bartholomew Net Worth: Dave Bartholomew is an American musician, band leader, composer, and arranger who has a net worth of $1 million dollars. Bartholomew was born in Edgard, Louisiana in December 1920. Dave served in the United States Army during World War II. In 1945 he lead his own band Dave Bartholomew and the Dew Droppers in New Orleans, LA. Dave started recording for De Luxe Records in 1947. Starting in 1949 he worked as a bandleader, arranger, and talent scout for Imperial Records. He produced hits for Tommy Ridgley, Earl King, Frankie Ford, Robert Parker, Chris Kenner, and more. As a trumpet and tuba player Bartholomew has performed rhythm and blues, swing, big band, rock and roll, Dixieland, and New Orleans jazz. He wrote over 50 hits for Imperial Record with Fats Domino in the 1950s. Two of those songs hit #1 on the Billboard R&B chart: "Goin' Home", and "Ain't That a Shame". Bartholomew was responsible for the Fats Domino hit "Blueberry Hill". Dave started his own record label called Broadmoor Records. He was a key figure in the New Orleans music scene and helped pioneer rhythm and blues and rock and roll. He wrote the hits "One Night" and "Witchcraft" for Elvis Presley. He also wrote the song "My Ding-a-Ling" which became Chuck Berry's only #1 hit. He produced hits such as "Lawdy Miss Clawdy", "I Hear You Knocking", and "Let the Good Times Roll". He was inducted into the Rock and Roll Hall of Fame in 1991 as a non-performer. Bartholomew is also a member of the Songwriters Hall of Fame and the Louisiana Music Hall of Fame. 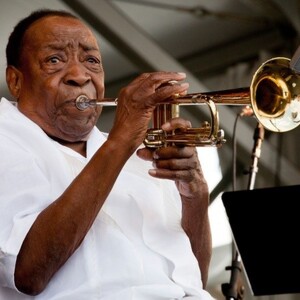