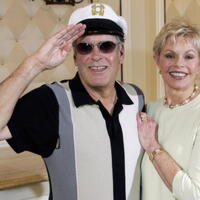 Daryl Dragon net worth: Daryl was an American keyboardist and musician who has a net worth of $4.5 million. Daryl Dragon was best know as Captain in the successful 1970s pop music duo Captain & Tennille, with his wife, Toni Tennille. Dragon was born into a musical family on August 27, 1942 in Los Angeles, California. He was a keyboard player with The Beach Boys in the early 1970s. It was actually Beach Boys lead singer Mike Love who gave Dragon his nickname "Captain," which Dragon carried on by wearing a nautical captain's hat each time he appeared on stage. He was frequently silent, and a man of few words, which was quite the opposite of his outgoing wife, Toni Tennille. In late 2009, his wife announced that Dragon had developed a neurological condition that was similar to Parkinson's disease, which manifested through a familial tremor. The disease was neither debilitating, nor terminal for Dragon for some nearly a decade, but it did cause a noticeable tremor that was exacerbated by stress and anxiety and subsequently, limited Dragon's musical career and his public appearances. In January of 2014, Tennille filed for divorce from Dragon after 39 years of marriage. Dragon said he was unaware of this until he was served with divorce papers and said he has no idea why she filed. The divorce documents referenced health insurance and health issues and may be the cause for the divorce, but Tennille never confirmed a definitive reason for the divorce. Unfortunately Daryl Dragon died on January 2, 2019 at the age of 76.