Danielle Bradbery net worth: Danielle Bradbery is an American country singer who has a net worth of $300 thousand dollars. Danielle Bradbery was born in League City, Texas, and grew up in Cypress, Texas. She went on to attend Cypress Ranch High School. While still in high school, she auditioned for the reality singing competition, "The Voice".

She had very little performance experience, but three judges turned their chairs around for her during her blind audition. She chose to be mentored by Blake Shelton, and went on to make it all the way to the live rounds. She was popular from early in the competition, and became the first contestant on the show to have a single chart in the iTunes Top 10. By the end of the series, she had had the most singles reach the Top 10 on iTunes of any contestant, and the most peak positions. At age 16, she became the youngest winner of "The Voice". Her debut album, "Danielle Bradbery", was released in November of 2013. 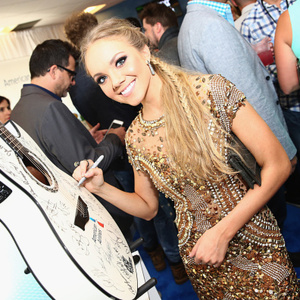