How much is Damon Albarn Worth?

Damon Albarn net worth: Damon Albarn is an English musician, singer-songwriter, and record producer who has a net worth of $40 million dollars. Damon Albarn was born in Whitechapel, London, England in March 1968. He is best known for being part of the bands Blur and Gorillaz. In school he met Graham Coxon and the two formed the band Blur. The band released their debut album Leisure in 1991. Blur has released seven studio albums. Their best known hits are "Girls & Boys" and "Song 2". The band went on hiatus in 2003 but reunited in 2008. They played during the 2012 Summer Olympics closing ceremony. Albarn formed the virtual band Gorillaz with Tank Girl creator Jamie Hewlett in 1998. Their self-titled debut album was released in 2001. They have released four studio albums and their debut sold more than seven million copies. The best known singles for the Gorillaz are "Clint Eastwood" and "Feel Good Inc.", and they were named the "Most Successful Virtual Band" by the Guinness Book of World Records. Albarn released his debut solo album called Everyday Robots in April 2014. With Blur he has won five BRIT Awards and an MTV Europe Music Award. Gorillaz have won a Grammy Award, two MTV Video Music Awards, and three MTV Europe Music Awards. 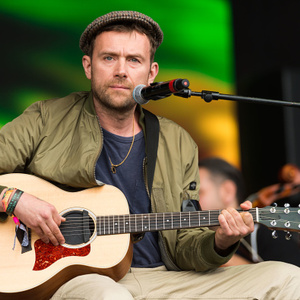