Joe was a student conductor and president of his high school marching band before enlisting in the United States Navy at 17. He co-founded Country Joe and the Fish in 1965 with Barry Melton. The band is famous for performing at both the original and 1979 reunion Woodstock Festivals. Their best known single is "The "Fish" Cheer/I-Feel-Like-I'm-Fixin'-to-Die Rag" from 1965. The band released six studio albums starting with their debut Electric Music for the Mind and Body in 1967. McDonald was sued for copyright infringement in 2003 but his defense was upheld. McDonald has also released many solo studio albums including his latest Time Flies By in 2012. He has also appeared in a few films and television series. He dated Janis Joplin for a time which led to the song "Janis". 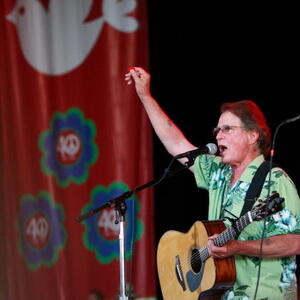