How much is Claudio Sanchez Worth?

Claudio Sanchez net worth: Claudio Sanchez is an American writer and musician who has a net worth of $3.5 million. Claudio Sanchez earned his net worth by being the lead guitarist and singer Coheed and Cambria and by authoring several books, including The Amory Wars and the Year of the Black Rainbow. Born March 12, 1978 in Suffern, New York, he is of Puerto Rican and Italian descent and best known for being the lead singer and guitarist for the alternative/progressive rock group Coheed and Cambria. He played in several bands prior to the formation of Coheed and Cambria, including Shabutie. He is also the creator of a comic book series called The Armory Wars as well as Key of Z and Kill Audio, both of which are co-written with wife Chondra Echert. Sanchez also co-authored the novel Year of the Black Rainbow with American writer Peter David. Sanchez began producing comic books in 2000, beginning with The Bag.On.Line Adventures which, due to problems with the artist, deadlines and financial issues, lasted only two issues. Sanchez also performs in a side project called The Prize Fighter Inferno, a concept-based band revolving around a character named Jesse, a boxer known as the Prize Fighter Inferno. In September 2012, Sanchez released his latest piece for the side project, a four-song non-conceptual EP entitled Half Measures. 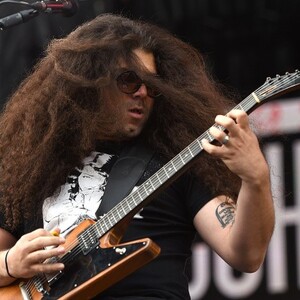