Claudia Leitte net worth: Claudia Leitte is a Brazilian singer-songwriter who has a net worth of $20 million. Claudia Leitte was born in Sao Goncalo, Rio de Janeiro, Brazil in July 1980. She is sometimes known by her nickname Claudinha. Leitte was the lead vocalist of the group Babado Novo which had several hit songs in Brazil.

Her debut solo album Ao Vivo em Copacabana was released in 2008 and her debut studio album As Mascaras was released in 2010. Leitte's single "Exttravasa" reached #1 in Brazil and her album As Mascaras was nominated for a Latin Grammy Award for Best Brazilian Contemporary Pop Album. Leitte was featured on the official song of the 2014 FIFA World Cup "We Are One (Ole Ola)" with Pitbull and Jennifer Lopez. Claudia Leitte is also a coach and mentor for the Brazilian version of the TV series The Voice since 2012. 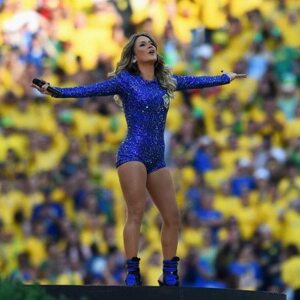