Chronixx net worth: Chronixx is a Jamaican reggae artist who has a net worth of $2 million. Chronixx was born in Jamaica in October 1992. His father was a singer who went by Chronicle and he gave Chronixx the name Little Chronicle. He has been credited with being part of the "Reggae Revival" movement.

He wrote his first song at five years old and started producing at 15. Chronixx started getting significant airplay in Jamaica in 2012 and started performing at festivals. He had hits with the singles "Here Comes Trouble" and "Smile Jamaica" and toured in the United Kingdom and the United States. He performed in Nairobi in 2012 as a Peace Ambassador. His debut album Hooked on Chronixx was released in 2011 as a digital download. His second album Dread & Terrible was released in 2014 and reached #1 on the US R&B chart. In 2014 Chronixx performed on The Tonight Show Starring Jimmy Fallon. He started the label ZincFence Recordz. Chronixx was featured on the 2012 mix tape Start a Fire with Major Lazer. In January 2015 he was featured on the Joey Badass single "Belly of the Beast". 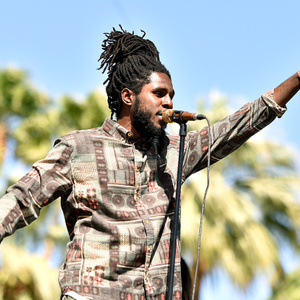