What was Christine McVie's net worth?

Christine McVie was an English musician who had a net worth of $105 million at the time of her death in November 2022. Christine McVie earned fortune and fame as a member of English/American rock group, Fleetwood Mac. She is considered one of the best songwriters of all time. Some of the most-famous McVie songs include "Don't Stop," "You Make Loving Fun" and "Little Lies." The first two appeared on the band's 1977 album "Rumours" which went on to sell more than 40 million copies. To date, Fleetwood Mac has sold over 150 million albums worldwide and they continue to be one of the highest-grossing touring acts in the world. When the band released a greatest hits album, Christine was the sole or primary songwriter on half of the tracks.

In October 2018 we learned some of the financial inner-workings of today's Fleetwood Mac thanks to a lawsuit filed by on-again-off-again member Lindsey Buckingham. Buckingham sued his former bandmates after he was abruptly removed from the group's 2018-2019 Live Nation tour. The lawsuit claimed that according to terms of their deal with Live Nation, each band member would receive $200,000 per show over 60 shows, for a total payout of $12 million. The amount could reach as high as $14 million depending on various attendance milestones and additional dates added down the road. Three months later the lawsuit was settled for an undisclosed amount. Buckingham released a statement saying:

In August 2021 Christine announced she had sold the rights to her publishing royalties to music investment company Hipgnosis. The sale amount was not released but several months earlier, Stevie Nicks sold her catalog rights – which included a number of solo hits – for $100 million. 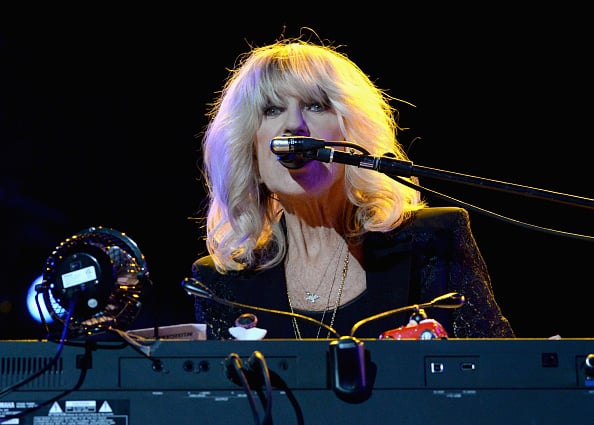 McVie was born in the Lake District of Bouth, Lancashire in England on July 12, 1943. Her father, Cyril, was a concert violinist and music professor at St. Peter's College of Education. He also taught violin lessons. Her mother, Beatrice, was a psychic and faith healer. McVie grew up near Birmingham with her older brother, John. Though she began playing piano at the age of four, she didn't seriously study music until age 11. After focusing on classical music for several years, she shifted her interests to rock and roll at the age of 15.

Initially, McVie planned to become an art teacher. She studied sculpture at an art college in Birmingham for five years. It was during this time that she met a number of musicians involved in the local scene and she was invited to join a band called Sounds Of Blue. The band split up before McVie finished her studies, at which time she decided to move to London as she was having trouble launching her art career. She joined the band Chicken Shack with former bandmates from Sounds Of Blue and recorded two albums with them.

While in Chicken Shack, McVie was a fan of Fleetwood Mac, as both bands often crossed paths on tours and were signed to the sign label. She eventually joined Fleetwood Mac as a permanent member after marrying the bassist, John McVie, in 1970. Though she was not a founding member of the band, she became an integral member as the band had just lost Peter Green. McVie had been a huge fan of his and knew all of the lyrics to the songs so she was able to fill some of the hole created by his absence. Her first full album with the band was "Future Games."

The early 1970s were a generally challenging time for Fleetwood Mac, as there was almost a constant revolving door of musicians joining and quitting the group. By 1974, Fleetwood Mac decided to move from England to the United States. McVie agreed, though she was reluctant. Within a year of the move, Stevie Nicks and Lindsey Buckingham joined the band. Their 1975 album, "Fleetwood Mac," was a success and had a number of hit songs including "Over My Head" and "Say You Love Me."

In 1976, McVie began an affair with the band's lighting director. The relationship inspired the song "You Make Loving Fun," which became a top-10 hit on the album "Rumours." "Rumours" was an immensely popular record and became one of the best-selling albums of all-time. McVie's biggest hits from the album were "Don't Stop" and "Songbird."

Though the affair did inspire some popular content for the album, it also resulted in McVie's divorce by the end of the "Rumours" tour. The band then released the double album "Tusk," which did generally well but did not reach the success of "Rumours" by a longshot. After touring with the album, the band took a brief break before reuniting in 1981 to record the album "Mirage," which did much better on the charts.

Around this time, McVie recorded a solo album, which was released in 1984. It was moderately successful and included the songs "Got a Hold on Me" and "Love Will Show Us How," both of which charted in the United States. McVie also began a relationship with Eddy Quintela at this time, who went on to collaborate with McVie on many of the songs which were later featured on Fleetwood Mac albums. McVie joined the band for their album, "Tango in the Night," which was the band's largest success since "Rumours." The album's biggest hit, "Little Lies," was co-written by Quintela. McVie's song "Everywhere" also became very popular and went on to become one of Fleetwood Mac's most popular songs.

McVie decided to retire from touring with the band after the death of her father. However, she still played a very active role in Fleetwood Mac and continued writing and recording new songs for their albums. Despite some turbulence within the band, John McVie, Lindsey Buckingham, and Stevie Nicks all agreed to reunite, along with McVie, in the mid 1990s. They released a live album, "The Dance," which reached number one on the U.S. charts. McVie agreed to return to tour for this album and also performed with the band was inducted into the Rock and Rock Hall of Fame in 1998. However, after that year, she officially decided to not continue with the band as she had developed a phobia of flying.

Since then, McVie has been semi-retired. She rejoined Fleetwood Mac for the first time on-stage in 15 years in 2013 to play "Don't Stop" in London. Since then, she has appeared on stage more often and has continued releasing new much, both on her own and with the band or members of the band.

McVie married John McVie of Fleetwood Mac in 1968. They remained together until divorcing in 1976. In 1979, she became engaged to Dennis Wilson of The Beach Boys though the couple called off their engagement in 1982. She later began seeing keyboardist Eddy Quintela. The two married in October of 1986 but divorced in 2003.