What is Chris Stapleton's Net Worth?

Chris Stapleton is an American singer-songwriter and guitarist who has a net worth of $25 million. Chris Stapleton has released such acclaimed albums as "Traveller," "From a Room: Volumes 1 and 2," and "Starting Over." He has also co-written many hit songs for other artists, including Kenny Chesney's "Never Wanted Nothing More" and Luke Bryan's "Drink a Beer." Stapleton has won numerous accolades during his career, with multiple Grammy, ACM, and CMA Awards among them.

Chris Stapleton was born on April 15, 1978 in Lexington, Kentucky and grew up in Staffordsville. His father, Herbert Jr., was a coal miner, while his mother, Carol, worked at the local health department. He has an older brother named Herbert II and a younger sister named Melanie. As a teenager, Stapleton was educated at Johnson Central High School, where he played football and graduated as class valedictorian. He went on to attend Vanderbilt University as an engineering student, but ultimately dropped out after a year to pursue his music career.

Starting out just as a songwriter, Stapleton signed with the Nashville publishing company Sea Gayle Music in 2001. He eventually began singing and playing the guitar, and in 2007 became the frontman of the bluegrass band the SteelDrivers. Stapleton recorded two albums with the SteelDrivers, both of which were hits on the Bluegrass Albums chart: the group's eponymous 2008 debut and 2010's "Reckless." After leaving the band, Stapleton founded the Southern rock group the Jompson Brothers, which also included guitarist Greg McKee, bassist J.T. Cure, and drummer Bard McNamee. The band released a self-titled album and toured regionally for a few years before breaking up in 2013. 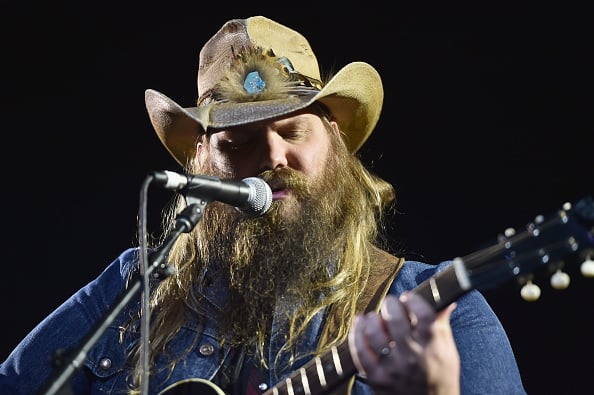 Songs for Other Artists

Stapleton has frequently worked as a songwriter for and with other artists, and has written or co-written numerous hits in this capacity. His credits include such number-one country hits as Kenny Chesney's "Never Wanted Nothing More," Josh Turner's "Your Man," and Luke Bryan's "Drink a Beer." Stapleton also co-wrote three songs for Justin Timberlake's 2018 album "Man of the Woods," including their hit collaboration "Say Something." Among his other songwriting contributions, he has co-written tracks with such artists as Mike Campbell, Tom Morello, Sheryl Crow, Jake Owen, and Ed Sheeran. Overall, Stapleton has accumulated more than 170 songwriting credits during his career.

Stapleton's musical style is a blend of country, Southern rock, classic rock, and bluegrass. With his tenor vocal range, he has a soul style of singing; meanwhile, he has played both acoustic and electric guitars. In terms of his musical influences, Stapleton has cited Ray Charles, Freddie King, Otis Redding, Dwight Yoakam, and Patty Loveless, among other artists.

In 2007, Stapleton married singer-songwriter Morgane Hayes, whom he had met while the two were working at adjacent publishing houses in Nashville. The couple has five children, including twin boys.

In March of 2017, Chris paid $5.625 million for a 311-acre property near Leiper's Fork, Tennessee. Perhaps not coincidentally, Chris' frequent collaborator Justin Timberlake owns a neighboring 126-acre property which he acquired two years prior for $4 million.