Chris Squire net worth: Chris Squire was an English musician and singer-songwriter who had a net worth of $10 million. Chris Squire was born in London, England in March 1948. He is best known for being the bass guitarist and backing vocalist for the rock band Yes. Squire is the last remaining original member of Yes and the only member who has appeared on every Yes album.

Yes formed in 1968 and went on to sell more than 13.5 million units in the US alone. The band has released a total of 21 studio albums started with their self-titled debut studio album in 1969. Their albums Tales from Topographic Oceans and Going for the One both reached #1 in the UK while their album Close to the Edge reached #1 in the Netherlands. The band's most popular single is "Owner of a Lonely Heart" which reached #1 on the Billboard Hot 100 and US Rock charts. Squire is regarded as one of the best bass players of the early 1970s British progressive rock scene. He released his solo album Fish Out of Water in 1975. Square announced that he was diagnosed with acute erythroid leukemia in 2015 and will take a hiatus from touring for the first time in the band's history. Chris Squire died on June 27, 2015 at the age of 67. 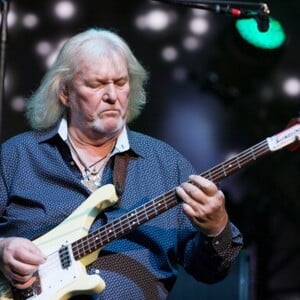