What is Chris Isaak's Net Worth?

Chris Isaak is an American musician and actor who has a net worth of $15 million. Chris Isaak is best known for his 1950s-style rock 'n' roll sound and his hit songs "Wicked Game," "Somebody's Crying," and "Baby Did a Bad Bad Thing." Over the course of his four-decade career, he has released numerous studio albums and received many award nominations. Isaak has also acted on television and in films, and maintains a particularly close affiliation with filmmaker David Lynch.

Chris Isaak was born on June 26, 1956 in Stockton, California to Joseph and Dorothy. He is of Black Sea German descent on his father's side and of Italian descent on his mother's. As a teen, Isaak went to Amos Alonzo Stagg High School, where he was class president for his first three years and student body president for his fourth. Additionally, he was the head of the all-boys cheerleading squad. Isaak graduated in 1974 as the class valedictorian. For his higher education, he went to the local San Joaquin Delta Community College, before transferring to the University of the Pacific. Isaak graduated from the latter school with a bachelor's degree in English and communications in 1981.

Following his college graduation, Isaak formed his first band, Silvertone. A rockabilly group, it included Rowland Salley on bass, James Calvin Wilsey on guitar, and Kenney Dale Johnson on drums. Later, in 1985, Isaak signed a contract with Warner Bros. Records as a solo artist. He subsequently released his debut studio album, named after his first band: "Silvertone." While the album was a critical success, it didn't do so well commercially. Performing relatively better was Isaak's self-titled second album, which just managed to make it onto the Billboard 200 in 1986.

Isaak had his career breakthrough in 1989 with his third studio album, "Heart Shaped World." The album became the best-selling of Isaak's career, receiving double Platinum certification from the RIAA. Moreover, it launched the single "Wicked Game," which became a top-ten hit when it was featured in David Lynch's 1990 film "Wild at Heart." 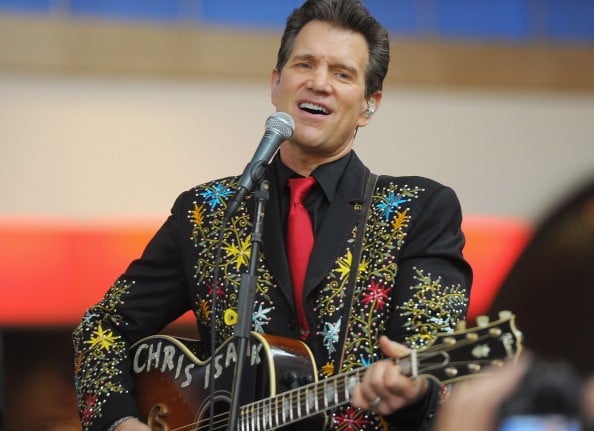 In 1993, Isaak released his fourth album, "San Francisco Days." Notably, the album's song "Two Hearts" was featured in the Tony Scott film "True Romance" the same year. Next, in 1995, Isaak released "Forever Blue," his first without longtime guitarist James Calvin Wilsey. A significant success, the album spawned three singles, including the Grammy-nominated "Somebody's Crying." Another single, "Baby Did a Bad Bad Thing," became a hit later in the decade when it was used in Stanley Kubrick's film "Eyes Wide Shut." Meanwhile, the album itself was nominated for the Grammy for Best Rock Album.

Isaak released his sixth album, "Baja Sessions," in 1996; it featured mostly acoustic arrangements and many covers of classic songs. This was followed by "Speak of the Devil" and "Always Got Tonight." In 2004, Isaak released the holiday album "Christmas." Five years later, he put out "Mr. Lucky." Isaak had one of the bigger successes of his later career with 2011's "Beyond the Sun," a collection of cover songs originally recorded by Elvis Presley, Roy Orbison, Johnny Cash, and other Sun Records artists. Isaak's next album, "First Comes the Night," came out in 2015.

Throughout his career, Isaak has been significantly affiliated with filmmaker David Lynch. In 1986, his songs "Gone Ridin'" and "Livin' for Your Lover" were featured in Lynch's "Blue Velvet." In 1990, "Wicked Game" was used in Lynch's "Wild at Heart." A couple years after that, Isaak was given a substantial acting role in Lynch's "Twin Peaks: Fire Walk with Me."

Among his many collaborations with other artists, Isaak worked heavily with the rock band the Lovin' Spoonful, doing production work for its albums. He also collaborated on solo albums by the band's members Jerry Yester and John Sebastian.

Beyond music, Isaak has acted in a number of films and television series. He first appeared on screen in a 1987 episode of the crime drama "Wiseguy." The following year, Isaak had a bit part in the crime comedy film "Married to the Mob." He showed up as a SWAT commander in 1991's "The Silence of the Lambs," and played Special Agent Chester Desmond in 1992's "Twin Peaks: Fire Walk with Me." Isaak's other film credits have included "Little Buddha," "That Thing You Do!," "A Dirty Shame," and "The Informers."

On television, Isaak has made guest appearances on such shows as "Friends," "Ed," "American Dreams," and "Hot in Cleveland." He had a bigger part in the 1998 HBO miniseries "From the Earth to the Moon," in which he played astronaut Edward White II, the first American to do a spacewalk. From 2001 to 2004, Isaak starred on his own sitcom, called "The Chris Isaak Show." Later, in 2015, he was a judge on the seventh season of the Australian version of "The X Factor." Among his other notable television credits, Isaak composed the theme song for the late-night television talk show "The Late Late Show with Craig Kilborn."

Isaak has never been married. He has stated that his primary relationship is with his music, and that he is happy with his life as a bachelor.

Today Chris is mainly based out of Nashville, Tennessee. In late 2017 Chris sold a 58-acre beachfront property in San Mateo, California that he owned somewhat secretly, for $5 million. He sold the property to an environmental group that plans to preserve the land and turn it into public space. According to property records, Chris bought the property in 1998 for $3.1 million through a trust. The property featured a large uninhabitable house on a bluff that was painted pink at some point. 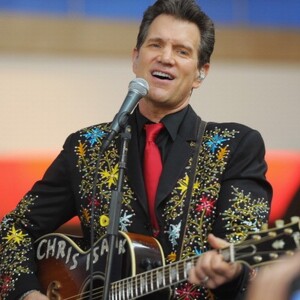