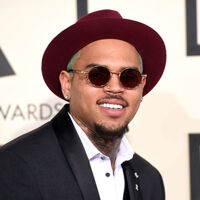 What is Chris Brown's net worth?

Chris Brown is an American R&B musician who has a net worth of $50 million. Since making his debut in 2005, Chris Brown has released nine studio albums, several of which have gone multi-platinum. Chris Brown started out as such a good, church-going young artist. He taught himself to sing and dance, and sang in the church choir, and was an all-around little angel.  In 2004, at the tender age of 15, he signed with Jive Records, and released his first album in 2005.  It went double-platinum.  His second album, "Exclusive", was an even greater success, spawning multiple chart-topping singles.  He has since released many more albums, and while none have achieved the level of success of his first two albums, they have all sold quite well.  Unfortunately, Mr. Brown has not been so successful in his personal life.  Like many stars who find fame early, he seems to have some self-control issues. This was made abundantly clear after he beat up his now ex-girlfriend, Rihanna in February 2009.

Christopher Maurice Brown was born in Tappahannock, Virginia on May 5, 1989 to Joyce Hawkins, a daycare center director, and Clinton Brown, a corrections officer. He has one older sister, Lytrell Bundy. His parents divorced when he was young and his mother became a victim of domestic violence by her new boyfriend. Chris taught himself to sing and dance growing up watching his idols Usher, Michael Jackson. Chris has also cited his parents' collection of soul records as a major musical influence in his early years. 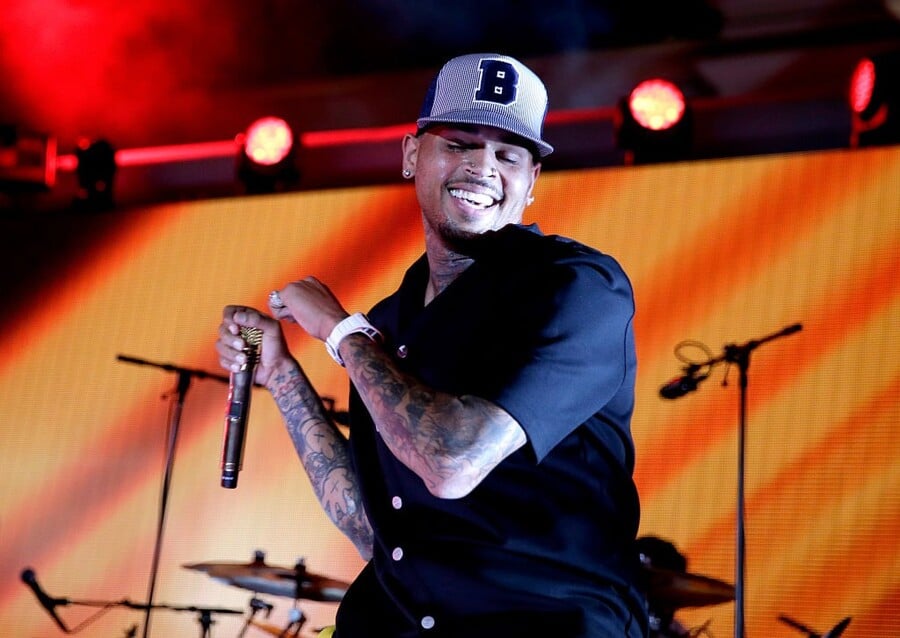 With his mother's help, Chris sought a recording contract in his early teens and eventually moved to New York to find representation. He recorded his debut album, Chris Brown, at the age of sixteen. His single "Run It!" was popular enough to make Brown the first male artist to debut at number one on the Billboard charts since Montell Jordan in 1995. In 2007, Brown released his second album, Exclusive, which debuted at number four on the Billboard charts. Exclusive also spawned his second Hot No. 1 hit on the Billboard charts, Kiss Kiss. Chris released his third album, Graffiti, in 2009. He released the album F.A.M.E. in 2011, which became his first album to top the Billboard 200. The album also earned him a Grammy Award for Best R&B Album. His fifth album, Fortune, was released in 2012, once again topping the Billboard 200. Brown released X, also in 2012, a collaboration album called Fan of a Fan: The Album in 2015, Royalty, also in 2015 and Heartbreak on a Full Moon in 2017. Brown's ninth studio album Indigo came out in 2019 and it became his third number-one album to debut on the Billboard 200.

Brown has toured to support all of his albums. He was the opening act for Beyoncé Knowles on portions of her The Beyoncé Experience tour and supported Rihanna on her Good Girl Gone Bad tour. To date, he has sold more than 100 million albums and singles worldwide. Chris Brown is one of the world's best selling artists. He has won a Grammy, 15 BET Awards, four Billboard Music Awards, and six Soul Train Music Awards.

In January 2007, Brown made his acting debut in the film Stomp the Yard. He also played a small guest-starring role in the television series The O.C. Later that year, he appeared in the film This Christmas. He also appeared in the films Takers, Think Like a Man, and Battle of the Year, as well as the TV show Black-ish. 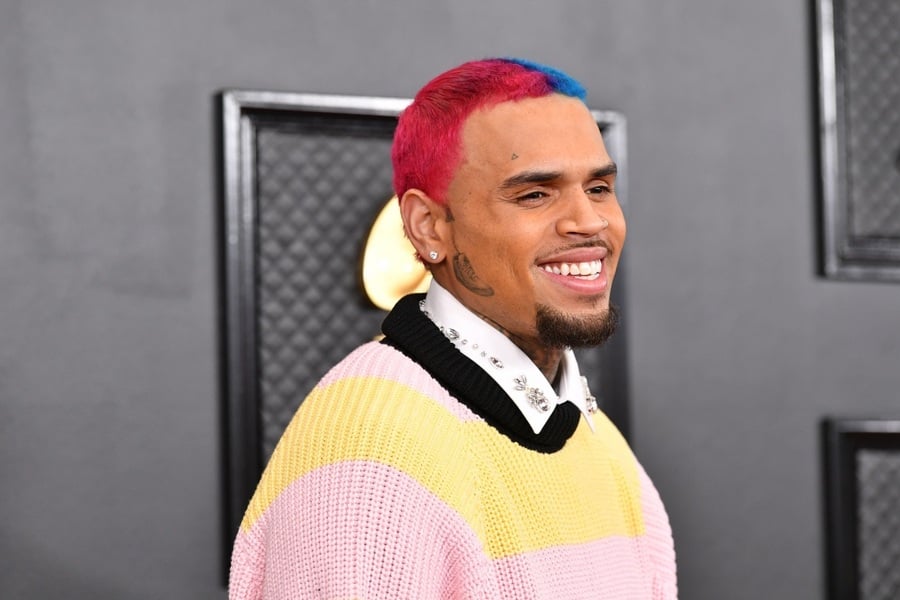 On February 8, 2009, Brown was arrested and charged with making criminal threats against his then-girlfriend, R&B singer Rihanna. The two had an argument which had escalated to physical assault and left Rihanna with injuries that required hospital attention. After his arrest, several commercials and TV shows featuring him were suspended, and he withdrew from public appearances.

He was sentenced to one year of domestic violence counseling, six months of community service, five years of probation, and a five-year restraining order from Rihanna. A month later he was charged with felony assault. He pleaded guilty in June 2009. The next year, Brown's applied for a visa to enter the UK to do a tour of British cities but was denied on account of "being guilty of a serious criminal offense." On March 11, Brown became violent in his dressing room on a commercial break after he was interviewed by Robin Roberts of Good Morning America and was asked about the restraining order and the Rihanna situation. He threw an object through a window that overlooked Times Square, then stormed out of the building shirtless. Brown's probation ended formally on March 20, 2015.

Chris has been involved in scuffles and altercations with Drake, Tony Parker, and Frank Ocean. In July 2013, Brown was charged with an alleged hit-and-run in L.A. The charges were later dropped, but he had 1,000 additional community service hours added to probation. Brown was arrested in Washington DC in October 2013 for felony assault after refusing to take a photo with two men. Brown was released after 36 hours in a Washington jail and voluntarily checked into a rehab facility. After he completed 90 days, a judge ordered him to remain until April 23, 2014. On March 14, 2014, Brown was kicked out of the rehab center for rule violation and sent to Northern Neck Regional Jail. At his May 9, 2014 court date, he was sentenced to 131 days in jail, but was given credit for time already spent in rehab and jail. Brown was released on June 2, 2014 due to overcrowding.

Brown is prohibited from possessing a firearm due to his previous felony assault conviction. On August 30, 2016, a call was made to the police from a woman who claimed that Brown had threatened her with a gun in his house. Brown refused entry to the cops when they showed up and a stand-off ensued that provoked the action from the LAPD robbery-homicide division and the SWAT team. He was arrested, and charges were later dropped.

Brown is banned from entering the United Kingdom, Australia, New Zealand, and Japan due to his criminal record. 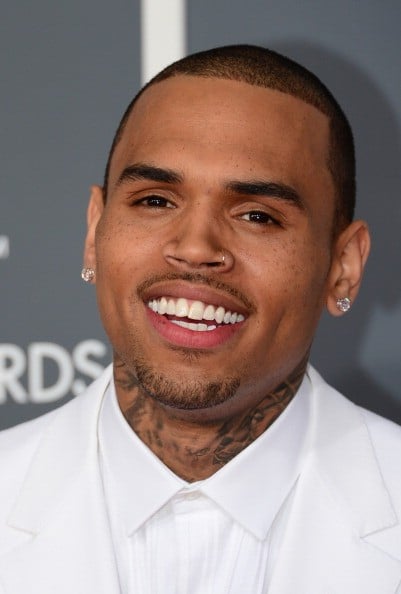 Chris has stated in several interviews that he owns 14 Burger King restaurants. In 2012 he launched a clothing line called Black Pyramid. Since 2007 he has operated a record label under Interscope called CBE (Chris Brown Entertainment).

Brown dated model Karrueche Tran. They parted ways in 2015, and Tran was granted a five-year restraining order against Brown, claiming he threatened to kill her. Brown has two children.

Since 2014, Chris' primary residence has been a 4-bedrom hilltop mansion in Tarzana, California. He bought the home, which has an 8,000 square foot home on 0.75 acres, for $4.35 million. Here's an aerial shot of Chris Brown's Tarzana mansion:

From 2011 to 2015 he lived in the Hollywood Hills in a hillside home that cost $1.5 million. He vacated this home after getting into a war with neighbors over the graffiti he added to the mansion exteriors. He previously lived in a condo in West Hollywood which he bought in 2. He was essentially kicked out of this condo by the homeowners association for excessive noise and allegedly having hallway dog races. He also frequently parked his cars in the building's handicap spots. He sold this property for $1.6 million, roughly what he paid in 2011.