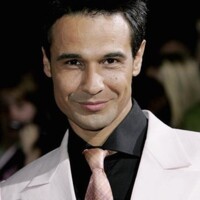 Chico Slimani Net Worth: Chico Slimani is a British singer who has a net worth of $2 million. Chico Slimani was born in Bridgend, Wales in April 1971. Chico became famous after he reached the quarterfinals of the reality TV series The X Factor in 2005. He worked as a male stripper and was part of an exotic dance troupe. In 2004 he starred in, co-wrote, produced, and provided the soundtrack for the short Winner Takes All which was nominated for a BAFTA Award. Slimani's debut studio album Lights, Camera, Action was made in 2006 but never released due to poor sales. His most successful single is "It's Chico Time" which reached #1 in the UK and #3 in Ireland. His single "D.I.S.C.O." also had moderate success making the top 40 in both the UK and Ireland. Slimani also composed and executive producer the 2007 short Left Holding Baby. He placed third on the reality TV series CelebAir in 2008.