Chayanne Net Worth: Chayanne is a Puerto Rican Latin pop singer, actor and composer who has a net worth of $40 million dollars. Born Elmer Figueroa Arce on June 28, 1968 in Rio Piedras, Puerto Rico, he has released 21 solo albums and sold over 30 million albums worldwide. He also holds the record for the most album sales in Spain.

In the late '70s he auditioned for Menudo, but was told he was too young for the group. He then joined another group called Los Chicos and they produced several hit recordings, including Puerto Rico Son Los Chicos and Ave Maria. Chayanne's solo career under RCA records began in 1984 when he left Los Chicos. In the '80s Chayanne had acting parts in several soap operas and starred in the comedy series Generaciones with Luis Antonio Rivera. In 1998, he starred in his first Hollywood role, playing a Cuban dancer along with Vanessa L. Williams in Dance with Me. He also made a guest appearance on the American television series Ally McBeal. In 1994, he played himself in Volver a empezar along with Yuri. That same year he also starred in Linda Sara opposite former Miss Universe, Dayanara Torres. In 2008, Chayanne played the title role (a vampire) in a television series entitled Gabriel: Amor Inmortal. To familiarize himself with the role and concept he reportedly adopted a different daily schedule, sleeping during the day and working at night. 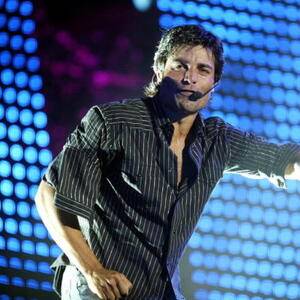