She began her career in 2007 by competing in singing competitions to help support her family as a child. She placed 3rd in the major televised Filipino vocal competition show, "Little Big Star", in 2005. She started to gain widespread attention when a fan posted videos of her singing on YouTube.

Her performances caught the attention of Ten Songs/Productions in Sweden, and she subsequently recorded her first demo. Since then, her career has exploded, and she has performed around the world, and appeared on the Ellen DeGeneres Show and the Oprah Winfrey Show. She has performed duets with Andrea Bocelli in Italy and Celine Dion at Madison Square Garden. She joined the cast of "Glee" during Season 2 as a foreign exchange student who challenges Rachel Berry played by Lea Michelle. She has released five studio albums, several of which have been certified Platinum.

Transition and Sexuality: Charice came out as a lesbian in 2013. In 2017 she adopted the name Jake Zyrus and announced she was fully transitioning to a male. 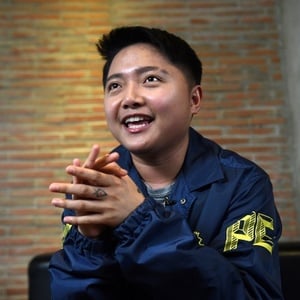