Celia Cruz Net Worth: Celia Cruz was a Cuban-American salsa singer/performer who had a net worth of $1 million. Úrsula Hilaria Celia de la Caridad Cruz Alfonso de la Santísima Trinidad (best known as Celia Cruz) was born October 21, 1925 in Havana, Cuba. Considered one of the most popular salsa artists of the 20th century, Cruz earned twenty-three gold albums and was the recipient of the National Medal of Arts.

She was internationally renowned as the Queen of Salsa, La Guarachera de Cuba as well as The Queen of Latin Music. Celia Cruz spent much of her career in the U.S. as well as several Latin American countries. Growing up in Cuba's diverse 1930s musical landscape, Cruz listened to a plethora of musicians who influenced her adult career, including Fernando Collazo, Abelardo Barroso, Pablo Quevedo and Arsenio Rodríguez. Despite her mother's opposition, as a child Cruz learned santería songs from her neighbor who practiced santería. Cruz later studied the words to Yoruba songs with colleague Mercedita Valdes (an Akpwon santería singer from Cuba) and recorded several religious songs. As a teenager, an aunt took Celia Cruz and her cousin to cabarets to sing, but her father encouraged Cruz to attend school in the hopes that she would become a teacher. Cruz began singing in Havana's radio station Radio Garcia-Serra's popular Hora del Té daily broadcast, where she sang the tango nostalgias and won first place. She often won contests, which afforded new opportunities to participate in more contests. Her first recordings were in 1948 in Venezuela. On July 16, 2003, Cruz died of brain cancer at her home in Fort Lee, New Jersey at the age of 77. On March 16, 2011, Celia Cruz was honored by the U.S. Postal Service with a commemorative postage stamp. The Cruz stamp was one of a group of five stamps honoring Latin music greats, which included Selena, Tito Puente, Carmen Miranda and Carlos Gardel.

The Smithsonian's National Museum of American History collaborated with photographer Robert Weingarten to create a portrait of Celia Cruz and the portrait was unveiled October 3, 2012. 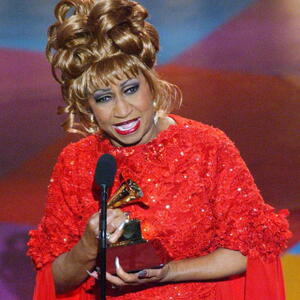