Carol Kaye net worth: Carol Kaye is an American musician who has a net worth of $8 million dollars. Born in Everett, Washington on March 24, 1935, Kaye is best known for her prolific career as a bassist, having achieved 10,000 recording sessions by the 55th year in her music career. She became active in the music industry in the 1950s and took off by playing bass for Phil Spector and Brian Wilson in the 1960s and 1970s.

She has been associated with The Beach Boys, The Doors, Ritchie Valens, Frank Sinatra, Nancy Sinatra, Glen Campbell, Leon Russell, Sonny & Cher, Joe Cocker, Barbra Streisand, Ray Charles, Frank Zappa, Ike & Tina Turner, Johnny Mathis, Simon & Garfunkel, The Righteous Brothers, The Marketts, Herb Alpert, The Buckinghams, Paul Revere & The Raiders, Gary Lewis & The Playboys, The Monkees, Buffalo Springfield, Howard Roberts, Joe Pass, and more. She played bass on the Beach Boys' hit album, Pet Sounds. Kaye started off playing bebop style jazz guitar in various nightclubs in the Los Angeles vicinity. She stumbled upon some studio work with Sam Cooke in 1957, which led to being asked to fill in on bass for a recording session for Capitol Records. She eventually contributed to Phil Spector's "Wall of Sound" in the production of "River Deep, Mountain High," which was added to the Grammy Hall of Fame. She has a series of tutorial books including How to Play the Electric Bass, which she first wrote in 1969. She retired briefly due to arthritis but returned to the industry as a performer and teacher. 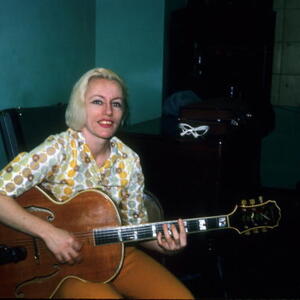