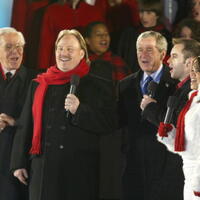 Carl Tanner net worth: Carl Tanner is an American operatic tenor who has a net worth of $8 million. Carl Tanner started taking violin lessons at 13 years old. He sang in his high school choir and graduated from the Shenandoah Conservatory of Music at Shenandoah University. He worked as a big rig truck driver and moonlighted as a bounty hunter. Tanner moved to New York City and worked as a singing waiter. He starred in a performed of Edgar at the Opera Theatre of Northern Virginia in 1994 and has gone on to star in several productions including with the Washington National Opera. He has been a soloist with the Atlanta and St. Louis symphonies and in 2004 he sang "O Holy Night" for the Christmas tree lighting at the White House. Carl Tanner released the Christmas album Hear the Angel Voices in 2006. He founded the jewelry design company Carl Tanner Designs in 2016.