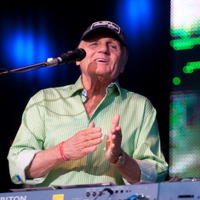 Bruce Johnston net worth: Bruce Johnston is an American musician, songwriter and producer who has a net worth of $30 million dollars. Born in Peoria, Illinois in 1942 as Benjamin Baldwin, Bruce Johnston is best known for being part of The Beach Boys. He studied music in high school and played on Sandy Nelson's "Teenbeat," a song that would ultimately reach the Billboard Top Ten. He produced several songs and an album in the early 1960s before joining the Beach Boys on the bass. He penned a handful of songs for the band, including "Disney Girls". His voice is also featured in the songs "Deirdre" and "Tears in the Morning". Seven years after joining the band, Johnston left to pursue solo music and wrote the chart-topper "I Write the Songs" for Barry Manilow, before he returned to the Beach Boys in 1978. He was part of the band's 2012 reunion album and tour. Johnston won one Grammy Award for Song of the Year.