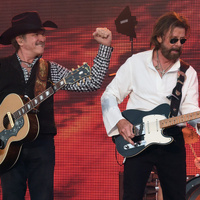 Brooks And Dunn Net Worth

Brooks And Dunn net worth: Brooks And Dunn is an American country music duo who has a net worth of $100 million. Brooks And Dunn consists of Kix Brooks and Ronnie Dunn who are both songwriters and vocalists. They formed the duo in 1990 and were both solo artists before coming together. Brooks and Dunn have recorded 10 studio albums and have had 20 #1 songs on the Hot Country Songs charts including 19 more that made the Top 10. Their songs "My Maria" and "Aint Nothing 'Bout You" both were the top country songs of their respective years. Brooks and Dunn won the Country Music Association Vocal Duo of the Year Award every year from 1992 to 1999 and then again from 2001 to 2006. Their songs "Hard Workin' Man" and "My Maria" have won Grammy Awards for Best Country Performance by a Duo or Group with Vocal. Eight of their studio albums have been certified platinum or higher. Their single "Boot Scootin' Boogie" helped to make line dancing popular again in the United States in 1992. Their single "Only in America" has been used in presidential campaigns by George W. Bush and Barack Obama. Brooks and Dunn announced their retirement in 2009 but have continued to record as solo artists. In 2015 they reunited for a series of concerts with Reba McEntire in Las Vegas, Nevada.