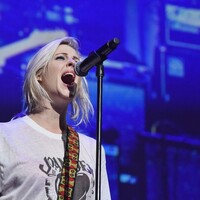 Brody Dalle was born in Melbourne, Australia in January 1979. She relocated to Los Angeles, California at 18 years old and started the punk rock band The Distillers. The band formed in 1998 and broke up in 2006. They released their self-titled debut studio album in 2000 and the albums Sing Sing Death house in 2002 and Coral Fang in 2003. Dalle formed the band Spinnerette in 2007 and they released their self-titled debut studio album in 2009. Her debut solo album Diploid Love was released in 2014 and Dalle has also released two EPs with the band Sourpuss. Dalle has also made guest appearances for the artists Transplants, Queens of the Stone Age, Eagles of Death Metal, Freeland, Boots Electric, and Garbage.

Personal Life: Brody first met Tim Armstrong the lead singer of Rancid in 1995 when she was just 16 and he was 30. She moved to Los Angeles to be with him a year later and married that year. Tim and Brody were married from 1997 to 2003.

Brody first met Queens of the Stone Age Singer Josh Homme at Lollapalooza in 1996. He was 23 at the time. She was 17 and still married to Tim Armstrong. They reconnected in 2003 after she had separated from Armstrong. They were officially married in 2005. Today they have a daughter and two sons. Unfortunately Brody filed for divorce in December 2019. In her filing she cited Josh's alcoholism and drug abuse as part of the reason for the divorce. He subsequently entered rehab. They eventually accused each other of domestic violence and took out competing restraining orders.