Brian Littrell Net Worth: Brian Littrell is an American singer and songwriter who has a net worth of $45 million. Brian Littrell was born February 20, 1975 and is best known as a member of the pop group the Backstreet Boys. He is also a contemporary Christian recording artist. Littrell was also a judge for the 8th annual Independent Music Awards to support independent artists' careers.

In April of 1993, the high school student was unexpectedly invited to audition for a new pop group, the Backstreet Boys, by his cousin Kevin Richardson. The next day Littrell was selected as the quintet's final member alongside Richardson, Nick Carter, AJ McLean and Howie Dorough. In between churning out more hits and putting on concerts with the Backstreet Boys, Littrell, the conservative, more straitlaced band member, found time in the studio for the music he really longed to create. In 2006, he released his first Christian music album, Welcome Home, which reached No. 3 on the Christian album chart, No. 1 on the U.S. Christian Inspirational chart and No. 74 on the Billboard 200 chart. Littrell also won two Gospel Musical Association (GMA) Dove Awards for Inspirational Recorded Song of the Year in 2006 and 2008. He also took home a GMA Dove Award for Special Event Album of the Year in 2008. Littrell was also a judge for the 8th annual Independent Music Awards to support independent artists' careers. Plagued with a congenital heart condition since childhood, in 1997 Littrell underwent open-heart surgery to fix a hole in his heart, and doctors discovered a hidden second hole. Littrell's son (at age 7) endured his own scare, overcoming Kawasaki disease in 2008. Grateful for his family's health, the pop star started Brian Littrell's Healthy Heart Club for Kids, providing information and support to families with children contending with heart conditions. In 2013, Richardson and the other Backstreet Boys appeared as fictional version of themselves in the comedy film This Is The End. 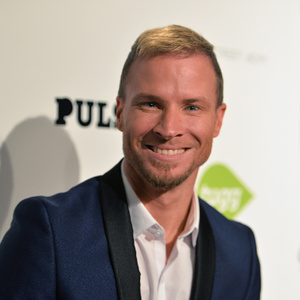