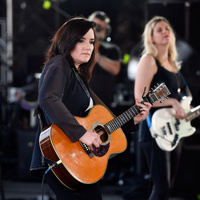 Brandy Clark Net Worth: Brandy Clark is an American country music singer-songwriter who has a net worth of $10 million. Brandy Clark was born in Morton, Washington in 1977. She started playing guitar at nine years old and sang in school musicals. Clark studied commercial music at Belmont University. She got a job with Leadership Music and then got a publishing deal. She has written songs that have been recorded by The Band Perry, Miranda Lambert, Reba McEntire, Billy Currington, LeAnn Rimes, Kacey Musgraves, and Darius Rucker. Clark's song "Mama's Broken Heart" was recorded by Miranda Lambert on her 2010 album Four the Record. The song was nominated for Song of the Year at the Country Music Association, American Country Awards, and Academy of Country Music, and for Best Country Song at the 56th Grammy Awards. Clark released her self-titled extended play in 2012. Her debut studio album 12 Stories was released in October 2013. The album reached #2 on the US Top Heatseekers, and #23 on the US Country charts. In 2014 she opened for Jennifer Nettles on her "That Girl" tour. Brandy is openly gay.