Bobby McFerrin Net Worth: Bobby McFerrin is an American singer best known for his 1988 hit song "Don't Worry, Be Happy", who has a net worth of $4 million. Bobby McFerrin was born on March 11, 1950 in New York City the son of opera singer Robert McFerrin and singer Sara Copper He grew up in Manhattan and Los Angeles and graduated from Cathedral High School in Los Angeles and the California State University, Sacramento.

McFerrin's song "Don't Worry, Be Happy" was a No. 1 U.S. pop hit in 1988 and won Song of the Year and Record of the Year honors. It was featured in the Tom Cruise movie "Cocktail". Despite this success, McFerrin's first recorded work, the self-titled album Bobby McFerrin, was not produced until 1982, when he was 32 years old. Before that he spent six years developing his musical style, the first two years of which he attempted not to listen to other singers at all, in order to avoid sounding like them. McFerrin is known for his unique vocal techniques, including giving the illusion of polyphony by singing alongside the melody, using percussive effects and making large jumps in pitch. He is a ten-time Grammy Award winner. 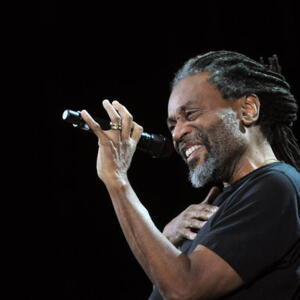