Bo Bice net worth: Bo Bice is an American singer and songwriter who has a net worth of $1.5 million. Bo Bice first rose to game when he appeared on the fourth season of reality TV singing program, American Idol. He earned second place that season, falling behind crowd favorite, Carrie Underwood.

He was born in November of 1975 and had released a solo album before appearing on the show. Since his sting on Idol, he has released various albums and had various songs reach American music charts, including Inside your Heaven, which peaked at number two in 2005. Bice hails from Huntsville, Alabama, where he was born to Nancy and Harold, the former of which was a gospel singer, as were her mother and grandmother, as well as her sisters. From a young age, Bice was known as "Bogart" by his family, after his grandmother gave him the nickname shortly after his birth. After appearing on Idol, Bice married his girlfriend, Caroline Fisher, in June of 2005. The two were wed in Alabama and had dated for multiple years prior. The couple had a son, Aidan on September of 2005, their second son, Caleb, was born in 2008, and their third, Ean, 2010. The couple's first daughter, Merrin, was born in 2012. 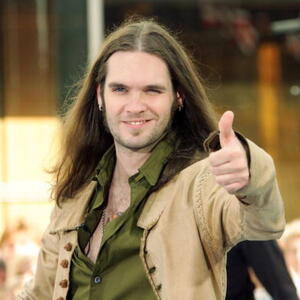