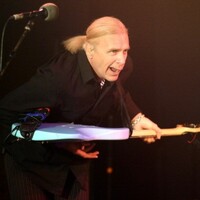 Billy Sheehan net worth: Billy Sheehan is an American musician who has a net worth of $2 million dollars. Billy Sheehan was born in Buffalo, New York, and began playing bass in his teens. His first full-time professional gig was playing bass for Talas. The trio was critically acclaimed and gained a large following on the East Coast, but never quite broke out. They also never signed a record deal, and finally went their separate ways. Billy Sheehan went on to play for the David Lee Roth Band and Mr. Big. He is also recognized for his work with Niacin. He has released four solo albums. He reunited with Mr. Big in 2009 for an Asian tour. Post-tour, the group released a new album. In 2012, he performed at a reunion concert with the members of Talas in Niagara Falls, New York. He recently formed a new group called, The Winery Dogs, with fellow musicians Mike Portnoy and Richie Kotzen. They released their first album in early 2013.