What is Billie Eilish's net worth?

Billie Eilish is an American singer and songwriter. As of this writing, Billie Eilish's net worth is $30 million. She started to gain a following in 2016 on SoundCloud and eventually singed a contract with Interscope Records. She earned mainstream fame after the success of her 2019 single "Bad Guy" which topped the Billboard Hot 100 chart.

Billie is one of the highest-paid musicians in the world. Between June 2019 and June 2020 she earned $50 million. Roughly $25 million of her earnings came from Apple which paid Billie for a documentary about her life. She would have earned even more money in 2020 had her arena tour not been canceled by Coronavirus.

Eilish was born on December 18, 2001 and was given the full name of Billie Eilish Pirate Baird O'Connell. She was born in Los Angeles, California to parents Maggie Baird, a actress and theater teacher, and Patrick O'Connell, an actor. Her parents are of Irish and Scottish descent and she has one older brother, Finneas. Both her and her brother were homeschooled.

Given that both of her parents were also musicians, Eilish and her brother Finneas were exposed to music at a young age and encouraged by their parents to explore a variety of performance and creative arts. Eilish wrote her first song at the age of 11 and began working on writing and producing music with her brother at the age of 13. They would upload their final cuts to SoundCloud. In 2015, Eilish released the song "Ocean Eyes" which was produced by her brother. The song was listened to hundreds of thousands of times within a couple of weeks, resulting in a deal with Apple Music in 2016 when Eilish was 15.

Following the success of Ocean Eyes, Eilish and her brother released "Six Feet Under" again on SoundCloud as their second single. Eilish then signed a deal with Interscope Records and steadily gained more and more fans as she continued releasing new music with the help of her brother. In August of 2017 she released her first full-length EP, "Don't Smile at Me." She embarked on her first tour in October of 2017 after performing at the popular South by Southwest music festival in March.

Spotify helped further launch Eilish into the spotlight by featuring her music on some of their most popular playlists and Apple Music named Eilish their "Up Next" artist in September of 2017.

In the beginning of 2018, Eilish began her second headlining tour, the "Where's My Mind Tour." She also signed a talent contract with Next Management for various fashion and beauty campaigns in October of the same year. Forbes also included her in their "30 Under 30" list in November. In January of 2019, Eilish broke a Spotify record by being the youngest artist to have more than 1 billion streams on a project with her EP "Don't Smile at Me."

In March of 2019, Eilish released her debut album, "When We All Fall Asleep, Where Do We Go?" which included the singles "Bury a Friend" and "When I Was Older." The album debuted in the top spot on the Billboard 200 and UK Albums charts, breaking a number of records. She became the first artist of the 2000s to have a number-one album in the United States as well as the youngest woman to ever debut at number one in the United Kingdom. She also broke the record for having the most songs simultaneously charting the Hot 100 by a female artist.

She began her tour for the album at the 2019 Coachella Festival in California which concluded in Mexico City in November. The same month, Eilish was nominated for six Grammy Awards, including Record of the Year, Song of the Year, Album of the Year, and Best New Artist.  At the age of 17, she became the youngest artist to have been nominated in all four of the General Field categories. At the 2020 Grammy Awards, she won all four categories, becoming the first woman and the youngest person to ever do so. It was also announced in 2020 that Eilish would perform the title track for the newest James Bond film, "No Time to Die," which was to be written and produced by her brother. 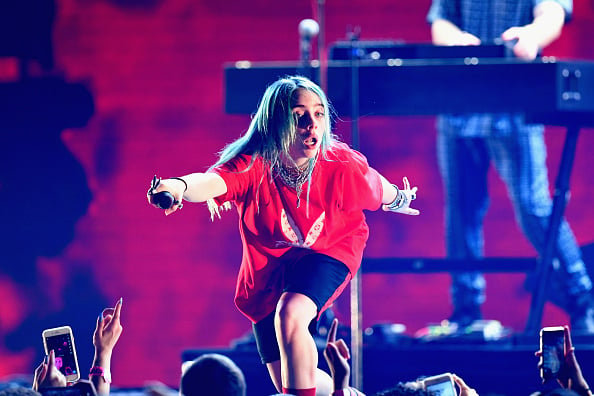 During the 2020 Covid-19 pandemic, Eilish performed a number of virtual concerts, including the iHeart Media Living Room Concert and in the Global Citizen's Tegether at Home series. She also livestreamed "Where Do We Go? The Livestream" in October of 2020 in order to raise money to support crew members who were affected by the pandemic. At the 2020 Billboard Music Awards, she won Top Female Artist, Top Album, and Top New Artist. Eilish won two additional Grammy Awards at the 2021 awards ceremony and announced in April of 2021 that her second album would be released later that year.

Eilish's voice has been described at ethereal and husky, singing in the soprano range. Her music style is flexible but often falls into the experimental and emo pop genres. Both her and her brother write the lyrics to her songs, writing in a conversational style.

In April 2019 Billie launched a clothing line in collaboration with Japanese artist Takashi Murakami (who directed some of Billie's videos). Around the same time Billie appeared in a series of advertisements for Adobe Creative Cloud.

In May 2019 she appeared in a series of ads for Calvin Klein.

In July 2019 she partnered with clothing brand Freak City on a new clothing line.

In August 2019 Billie partnered with Apple in a campaign the promote the Music Lab app. Around the same time, Apple paid Billie $25 million for the exclusive rights to a documentary about her life.

Even as she catapulted to fame, Eilish continued living with her parents at their home in the Highland Park neighborhood of Los Angeles. She remains close to her brother Finneas, who continues to produce all of her work.

While she has revealed that has previously experienced depression and has been diagnosed with Tourette syndrome, Eilish is otherwise generally private about her personal life. However she does enjoy making statements with her fashion choices, often opting for baggy and bold clothing, unlike many other young female stars. She is versatile as well and easily slips into more glamourous and high-fashion style and was featured on the cover of British Vogue in June of 2021. She is an advocate of vegetarianism and veganism.

In 2019, when she was still only 17, Billie paid $2.3 million for a ranch property in Glendale, California. 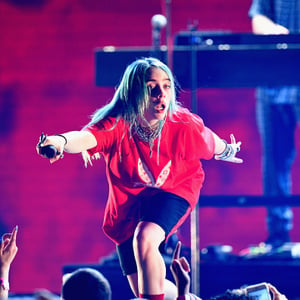