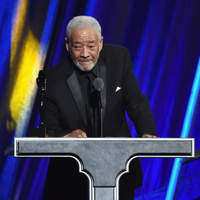 Bill Withers Net Worth: Bill Withers was an American singer and songwriter who had a net worth of $40 million at the time of his death in 2020. Bill Withers died on March 30, 2020 at the age of 81 from heart complications. During his career he wrote and performed a number of massive hit songs. His most famous songs include "Lovely Day", "Aint No Sunshine", "Lean on Me" and "Just the Two of Us". Bill was inducted into the Rock and Roll Hall of Fame in 2015.

He was born William Harrison Withers Jr. on July 4, 1938. As a kid he had a pronounced stutter. He joined the Navy at age 17 after graduating high school, going on to serve 9 years. In the Navy he was able to overcome his stutter.

After leaving the Navy he worked as a milkman then at an aircraft parts factory.

His musical career began in 1970, when his demo tape found its way to Clarence Avant at Sussex Records. He was quickly signed to a contract. One of the very first songs he recorded after entering a studio was "Aint No Sunshine". A year later, 1971, Bill released his debut studio album "Just as I Am". This album featured what would become one of Withers' most popular songs, the aforementioned "Ain't Sunshine". The song was a huge hit, winning a Grammy for R&B song of the year and sending Withers on a whirlwind tour of success in pop music. His next album, "Still Bill", was hotly anticipated before it was released just a year after his debut, in 1972. That album contained an even more popular hit for Withers, "Lean on Me." His third million-seller song, "Use Me," can also be heard on the album.

Bill released a total of eight albums during his career. He largely walked away from the business in 1985.

Bill Withers won three Grammy awards during his career. Decades after being first released, his songs are still frequently heard on the radio, covered by other artists and licensed for film and television. His Beverly Hills-based publishing company proved to be a highly lucrative business. The value of his music catalogue and royalty stream has been estimated in the tens of millions of dollars. He would later tell Rolling Stone that his royalty income and smart real estate investments made him a fortune over the years and allowed him to only perform publicly a handful of times from 1985 onward.