Bill Gaither Net Worth: Bill Gaither is an American gospel music singer and songwriter who has a net worth of $10 million. With southern gospel and contemporary Christian music as his specialty, Gaither is best known for performing as a member of the Bill Gaither Trio, and the Gaither Vocal Band.

Born William J. Gaither on March 28, 1936 in Alexandria, Indiana, he attended Stamps School of Music in Dallas, Texas. Next, he enrolled at the Taylor University and then transferred to Anderson College where he majored in English and minored in Music. In addition, he holds Master's degree in Guidance and Counseling. Before establishing himself a fully-fledged musician, Gaither taught in Junior High School of Anderson College and Alexandria High School. Speaking of music, he formed the gospel-singing groups Pathfinders in high school, Gaither Trio in college, and Gaither Vocal Band in 1981 after a major concert success. To date, he has written more than 700 gospel songs that include "Because He Lives", "He Touched Me", "The Longer I Serve Him", "Sinner Saved By Grace", "It Is Finished"," Jesus There's Something About That Name" and "Let's Just Praise The Lord". Furthermore, he has recorded more than 40 albums and on one occasion he collaborated with Benson Company in 1964. His devotion towards gospel music was so strong that he eventually quit his teaching job and served full time in the Christian music industry. Thus, he got the chance to work with Bob Mackenzie and established the Paragon Associates. In 1991, Gaither gathered some gospel-singing artists and recorded gospel classics. Their performance was shown on Family Channel entitled Homecoming, and Gaither went on to produce the Homecoming Concert Tour that went on the road to perform throughout the nation. He has received six Grammy awards, more than two dozen Dove awards, numerous recognitions and nominations including Gospel Songwriters for the Century by American Society of Authors, Composers, and Publishers (ASCAP) in 2000, as well as he got inducted to the International Gospel Music Hall of Fame in 2002.

Bill, a husband and father of three, now lives with his family in Alexandria, Indiana where they have a conference center, gourmet coffee shop and gift shops on the property. 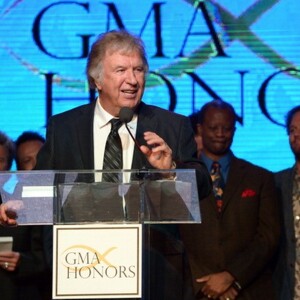