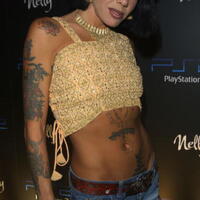 Bif Naked Net Worth: Bif Naked is a Canadian singer-songwriter, actress, and motivational speaker who has a net worth of $3 million. Bif Naked was born in New Delhi, Delhi, India in June 1971. She was adopted by American missionaries and lived in Lexington, Kentucky, Dauphin, Manitoba, and Winnipeg where she studied theatre at the University of Winnipeg. Her self-titled debut studio album was released in 1995 and contained the single "Daddy's Getting Married" which reached #1 on the Canadian Hot 100 chart. Her second studio album I Bificus was released in 1998 and was certified Platinum. The album contained the #1 single "Spaceman" and the #9 single "Lucky". Her 2001 album Purge was certified Gold and featured the #5 single "I Love Myself Today" and the #15 "Tango Shoes". Her 2005 album Superbeautifulmonster reached #12 in Canada and her 2009 album the Promise peaked at #30. As an actress Naked first appeared in the 1990 movie Archangel. She has also starred in the films The Boys Club, Lunch with Charles, House of the Dead, and Dress to Kill. She has also appeared in episodes of the TV series Once a Thief, Buffy the Vampire Slayer, Edgemont, The L Word, and The Cupcake Girls.