Beatrice Miller net worth: Beatrice Miller is an American singer, songwriter, and actress who has a net worth of $2 million. Beatrice Miller was born in Maplewood, New Jersey in February 1999. She finished 9th on season two of the reality TV series The X Factor and then signed with Hollywood Records and Syco Music. Miller's debut studio album Not an Apology was released in 2015 and reached #7 on the Billboard 200 chart. In 2014 she released the EP Young Blood which reached #64 in the US. Miller has released the singles "Young Blood" which reached #4 on the US Dance chart and #40 on the US Pop chart, and "Fire N Gold" which reached #47 on the US Pop chart. As an actress she has starred in the movies Confessions of a Shopaholic, Tell-Tale, Yes, Virginia, and Officer Down. She has provided voice work for the movies Ice Age: Dawn of the Dinosaurs and Toy Story 3. In 2015 Miller won a Radio Disney Music Award for Best Song to Rock Out to With your BBFs for "Young Blood". 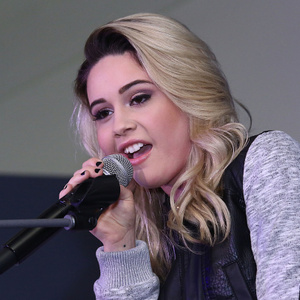