Barry White net worth: Barry White was an American singer-songwriter who had an estimated net worth of $20 million dollars. He was probably best known for his distinctive bass voice and romantic image, releasing hit songs like "Can't Get Enough of Your Love, Babe" and "You're the First, the Last, My Everything."

Early Life: Born in Galveston, Texas, on September 12, 1944, Barry White, whose birth name was Barry Eugene Carter, grew up in a very rough neighborhood in South Central Los Angeles. The older of two children, his father was Melvin A. White and his mother was Sadie Marie Carter. White has recalled in interviews about his voice suddenly deepening drastically at age 14. White's brother Darryl was tragically murdered in a clash with a rival gang in 1983. In his teens, White turned to gang life and was eventually jailed for theft for four months. While in jail, White recalled listening to Elvis Presley's song "It's Now or Never" on the radio, an experience he later credited with changing his life.

Music Career: After leaving prison, he turned his life around, left gang life, and shifted his focus to music. He began performing with a group called The Upfronts in the 60s, while also writing songs for other artists. He first released the song "Too Far to Turn Around" in 1960. He also recorded several singles under his own name around this time, backed by the vocal groups Atlantics and the Majestics. In 1965, White produced "Feel Aw Right" by the Bel Cantos and recorded his debut single, "Man Ain't Nothing", released under the name Lee Barry in 1966. In 1967, he co-wrote "Together Forever" with Pat Powdrill & the Power Drills.

Throughout the 70s, he wrote and produced multiple hit tracks for Bobby Fuller, The Banana Splits, and his most successful group, Love Unlimited. Producing for Love Unlimited, a Motown-style girl group, resulted in Barry's big break. Their 1972 album "From A Girl's Point of View We Give to You…Love Unlimited" became the first of White's string of long-titled albums and singles. He wrote, produced, and arranged their classic soul ballad "Walkin' in the Rain with the One I Love," which climbed to No. 14 on the Billboard Hot 100 Pop Chart and No. 6 on the Billboard R&B chart. The song became White's first million selling single as a writer and producer.

His solo performance career began somewhat accidentally, and started when he recorded a few songs himself so that another artist could consider using them on an upcoming album. He was persuaded, after much arguing, to release his own album, and a successful solo career began. His first solo album was 1973's "I've Got So Much to Give." It rose to No. 1 on the Billboard R&B charts and No. 3 on the Billboard Pop charts and stayed in the top 40 for several weeks.  He would go on to record 20 studio albums, 9 of which achieved Gold status, two achieved Silver status, and three achieved Platinum or Multi-Platinum status. He also won two Grammy Awards and was nominated for 11, and recorded seven #1 hits. While a seventies nostalgia wave bolstered White's popularity a bit in the '90s, White's success on the pop charts mostly slowed to a halt as the disco era came to an end. White's final album was 1999's "Staying Power," which resulted in his last hit song of the same title. His autobiography, "Love Unlimited," was written with Mark Eliot and published that same year by Broadway Books.

Acting Career: Outside of his music career, White also did voice-over work for TV and movies. He voiced the character Brother Bear in the film "Coonskin" in 1975 and appeared as himself in many episodes of "The Simpsons." He also appeared in commercials and did voice work for car commercials such as Oldsmobile and Jeep. White provided a voiceover for Arby's restaurant commercials, and his voice can be heard in Apple's first iBook commercial. White also made three guest appearances on the TV series "Ally McBeal," as his music was often featured on the show in dream sequences.

Personal Life: White married his childhood sweetheart Mary when he was 19. They separated in 1969 and later divorced. He married singer Glodean James in 1974. It was reported that they divorced in 1988, but it was revealed that they were still legally married until White's death in 2003, although they had lived separate lives.

White had at least nine children, two of them fathered with his first wife Mary by the time he was 16. They went on to have two more children and he had four children with Glodean James.

Health Problems: White suffered from health problems throughout his life, relating to being overweight. In 1995, he was admitted to the hospital with high blood pressure and he was forced to cancel a month's worth of tour dates owing to both high blood pressure and exhaustion. He was hospitalized in 2002 with kidney failure attributed to diabetes. In May 2003, White suffered a severe stroke while undergoing dialysis and awaiting a kidney transplant. He died on July 4, 2003 at Cedars-Sinai Medical Center in Los Angeles at the age of 58. 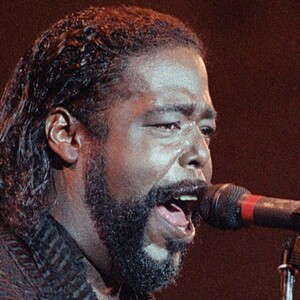