The Backstreet Boys Net Worth

How much is The Backstreet Boys Worth?

in Richest Celebrities › Singers
The Backstreet Boys Net Worth:
$200 Million

The Backstreet Boys net worth: The Backstreet Boys are an American pop group who have a net worth of $200 million dollars. The Backstreet Boys were formed in Orlando, Florida in the early 90s. The group is made up of A. J. McLean, Howie Dorough, Nick Carter, Kevin Richardson, and Brian Littrell, and was formally brought together by pop impresario, Lou Pearlman. After touring malls, parties, high schools, and colleges for a year, they signed with Jive/Zomba Records. They released a few tracks in Europe and Canada in 1995, and then spent the rest of the year building their popularity in Europe. Their first full album was released in 1996, and was massively successfully overseas. It was not released in North America. Instead, tracks from their debut album, and their sophomore album were released in the US in 1997, and they immediately shot up the charts. They dominated the pop music charts for the next few years, and then problems with management and addiction issues started to derail their momentum. They have since reunited multiple times, toured successfully, and have released six more albums, with 2013's "In a World Like This", being the most recent. 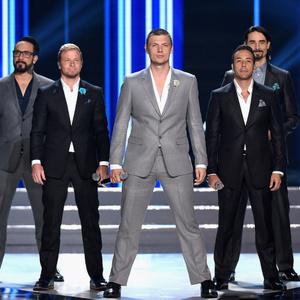