Asa Soltan Rahmati net worth: Asa Soltan Rahmati is a Persian-American singer and reality television star who has a net worth of $250 thousand dollars. Born in Iran, Asa Soltam Rahmati grew up in Europe, and then relocated to the United States and settled in Los Angeles when she was a teenager.

She is a singer and artist and is unconcerned with fitting into the traditional Persian value system. Asa attended UCLA where she earned a double degree in Psychology and Philosophy. Today she is most famous for being one of the original cast members of the Bravo reality series of Shahs of Sunset.  She travels a great deal to perform and is quite popular in the Venice, California art scene. Her social life is a reflection of her experimental artistic life, and she dates whomever she wants regardless of ethnicity or religion. During the second season of the show, Asa launched a high end bottled water company called "Diamond Water" that filtered the water through diamonds before being bottled. No word yet on the efficacy of this process. Asa has been in a relationship with Jermaine Jackson, Jr (son of Jackson family member Jermaine Jackson) since 2010. Shahs of Sunset debuted in 2012 and entered into its sixth season in 2017. Asa has also appeared on episodes of the TV series Watch What Happens: Live, The Jeff Probst Show, Big Morning Buzz Live, Wonderview, Dish Nation, The Shahs Come Clean with Nadine, and Home & Family. 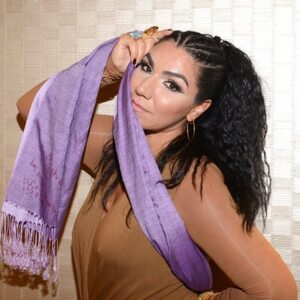