Arlo Guthrie net worth: Arlo Guthrie is a musician, singer and songwriter who has a net worth of $10 million. Arlo Guthrie has accumulated his net worth through his many performances as singer and songwriter of folk music and the blues, in particular, his protest songs. One of his most memorable songs was Alice's Restaurant Massacree. It's a song about an incident in Guthrie's life that eventually inspired the making of the film "Alice's Restaurant," in which he played the role of himself. He has also appeared in several films such as "Renaldo and Clara," "Roadside Prophets" and more, as well as co-starring in the ABC television series "Byrds of Paradise," in 1993-94, and appearing in shows such as "The Muppets," "Renegade," "Rich Man, Poor Man" and more. He also made a pilot for his own television show, "The Arlo Guthrie Show" in 1987 broadcasted on PBS. Guthrie has made a name for himself as a talented songwriter, folk singer, musician and actor, as well as the writer of a children's book called "Mooses Come Walking." It's written in rhyme and designed for the ages two to six. Arlo Guthrie was born in Brooklyn, New York in 1947. His parents were Woody and Marjorie Guthrie. Woody Guthrie was also a folk singer and songwriter and his mother was a dancer of the Martha Graham Company. Arlo's sister, Nora Gurthie was winner of the Grammy Award for Best Historical Album in 2008. Arlo attended Woodward Elementary School in Clinton Hills, Brooklyn and graduated from Stockbridge Boarding School in 1965. He also attended Rocky Mountain College for a short time. Arlo Guthrie was married to Jackie until her death in 2012. They have four children together. Their son Abe and daughters, Annie, Kathy and Sarah Lee are all involved in the music industry as singers, songwriters and musicians. 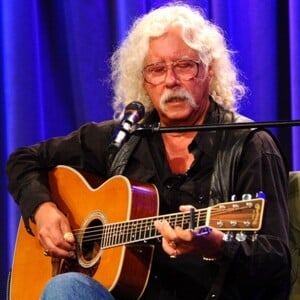